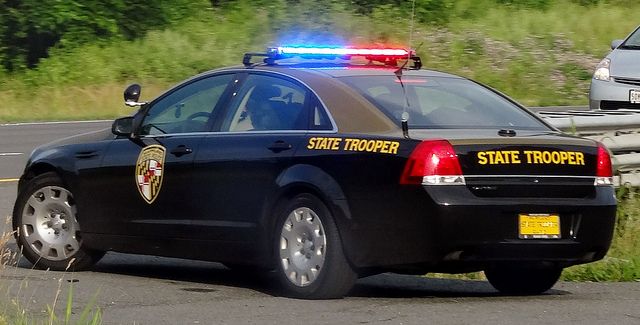 Dillon C. Haneke, 23, of Edgewater,  is accused of driving his car into the  side of the trooper’s car. Lee was  attempting to stop Haneke on the  suspicion of      impaired driving.

Multiple calls from concerned citizens reported a possible impaired driver, stating the driver was weaving through the lanes and driving very slow. Tpr. Lee spotted the reported vehicle and observed it weaving across lanes and driving about 10 mph.

The patrol car did not overturn, but Tpr. Lee was trapped inside the car. Unharmed, he was able to make his way out. Thankfully, no other vehicles were involved. Lee was transported to the Anne Arundel Medical Center by another trooper as a precaution and after examination he was released.

Haneke was not injured. He was arrested and charged withdriving under the influence, assault and reckless endangerment after other troopers on the scene observed multiple signs of impairment. A male passenger in Haneke's car, who was also impaired, was taken to the Anne Arundel County Medical Center by ambulance. Haneke was taken to the Anne Arundel County Central Booking Center for his initial appearance before a court commissioner Sunday night.