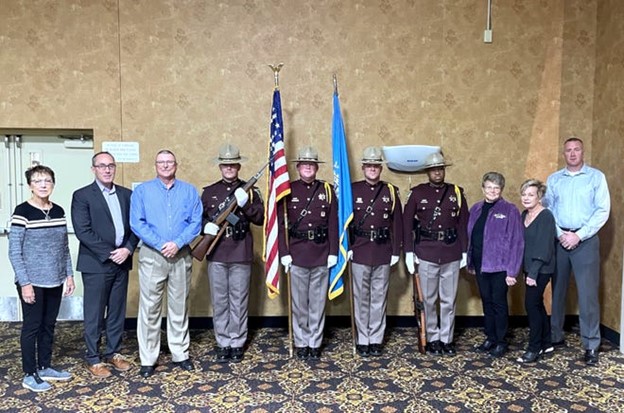 The South Dakota Highway Patrol were presented with Beef Bucks at the 2022 SD Law Enforcement Banquet in Sioux Falls on Nov. 9.

Beef Bucks are used at the discretion of the South Dakota Highway Patrol to distribute to law enforcement families in need this holiday season. This project has been done over the years as a way to thank these first responders for their services.

Beef Bucks, Inc. is a non-profit organization established for the purpose of beef promotion and consumer education. For more information on the Beef Bucks program, go to www.beefbucks.org.

THE 2023 CRUISER CALENDARS ARE READY TO SHIP! 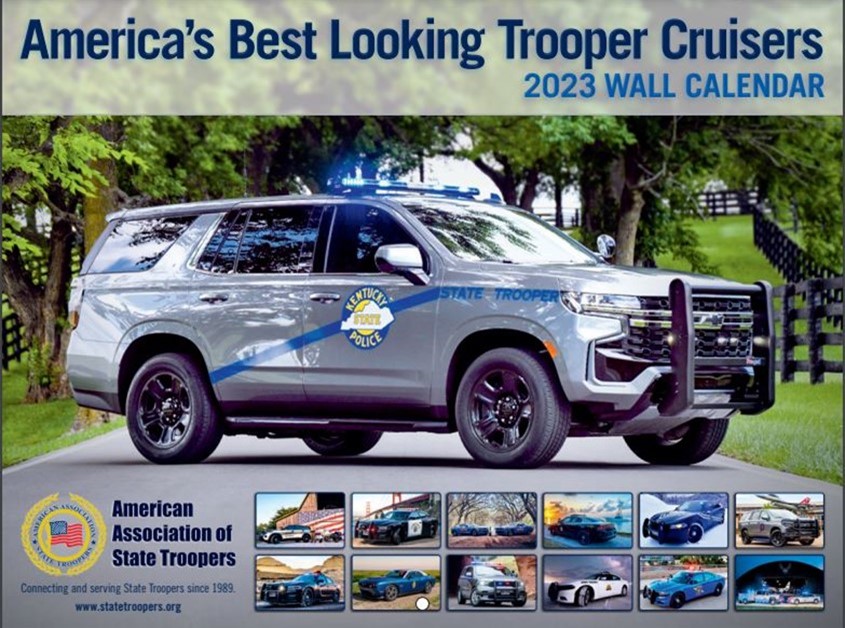 When purchasing the 2023 Cruiser Calendar you will be supporting the American Association of State Trooper Foundation. 100% of  the proceeds go directly towards the AAST Foundation which provides college scholarships to dependents of AAST members across the county. To date AAST has awarded over 3 million scholarships to more than 4,000 students.

These calendars can be purchased on our website www.statetroopers.org or directly by contacting our office at (850) 385-7904 x 201 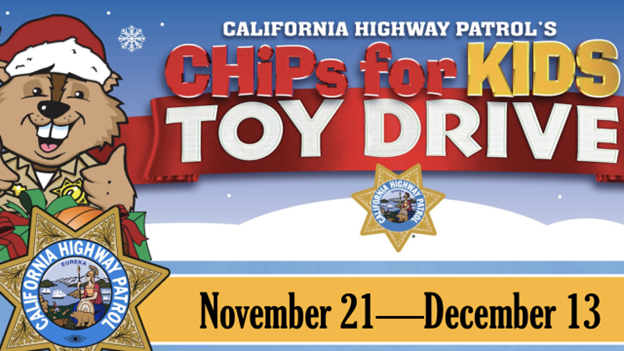 You can drop toys off at the following locations:

CHP says contactless donations are an option as well; the public can buy gifts via an Amazon registry the patrol set up.

The gifts will be distributed at events across San Diego County from Dec. 14 to Dec. 16. 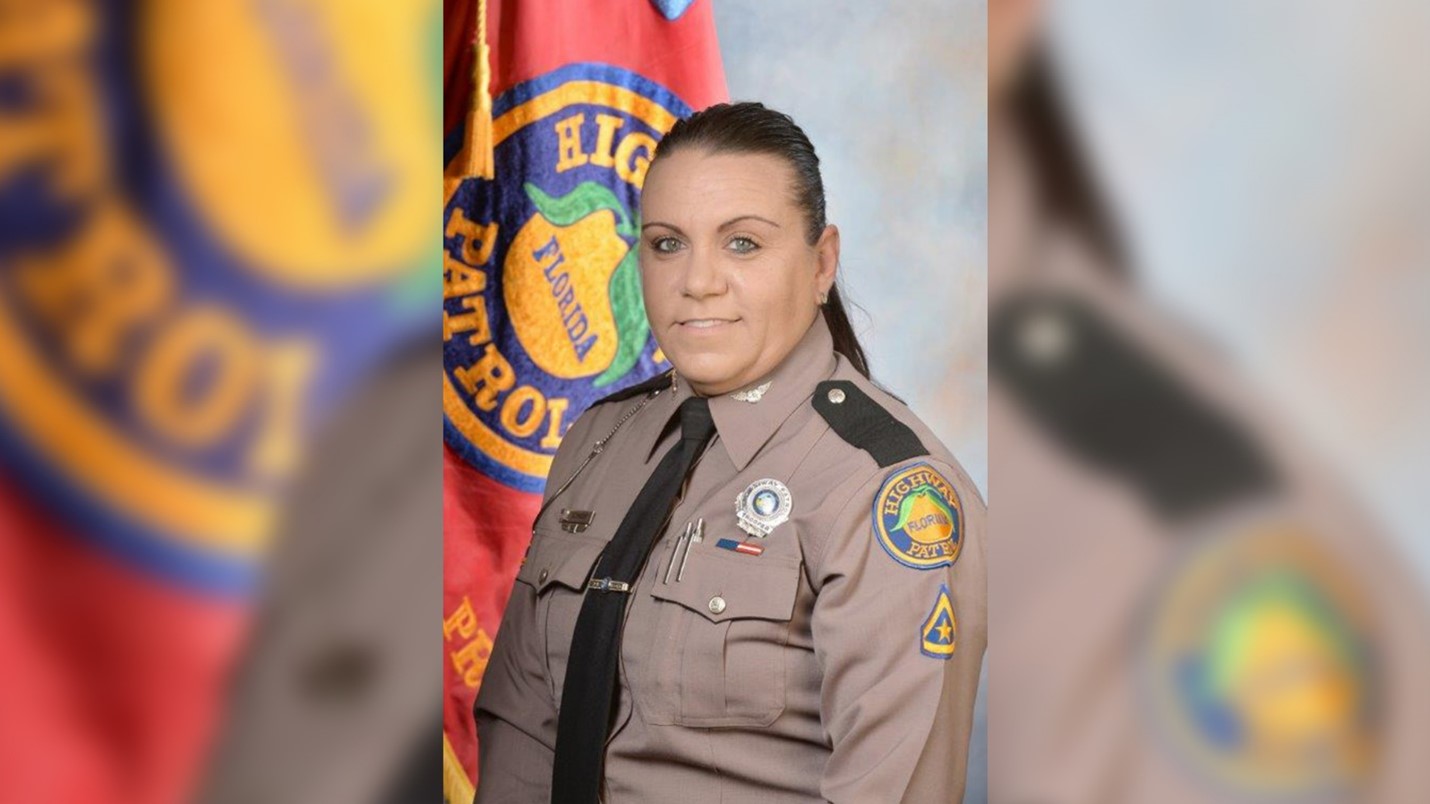 TAMPA, Fla. (WFLA) — Toni Schuck – a Florida Highway Patrol trooper lauded as a hero after she crashed into a drunk driver barreling towards the finish line during a race on the Skyway Bridge – was honored with the “Back the Blue” award at the Fox Nation Patriot Awards on Friday.

The 26-year law enforcement veteran was the “last line of defense” before the finish line, where thousands of Armed Forces Skyway 10K Race runners gathered after crossing the bridge. She heard a radio transmission saying a driver – later identified as Kristen Kay Watts, 52, of Sarasota – slammed through the detour barricades and was heading her direction at about 100 mph.

“I was the last officer, I knew that, I knew it was me,” Schuck said at a news conference after the March 6 crash. “If it wasn’t me to get her to stop, then who?”

Schuck said she’s still dealing with the effects of the crash months later. She has been in physical therapy since March, which will continue “for the foreseeable future”.

In a video that aired during the ceremony, she said she’s carried her grandmother’s bible with her on the job, every day for her 26-year career, and believes it helped her survive the high-speed crash.

“I believe there had to be someone riding with me,” she said, tearing up. “I think I had a guardian angel.”

While accepting the award, Trooper Schuck described how March 6 started out like any morning shift. She was gearing up to go home when she was thrust into a terrifying situation, with just two minutes elapsing between the driver breaking through the barricades and crashing into Schuck’s patrol car.

“That’s what law enforcement gets. We get those split-second decisions,” Schuck said. “And then the audience that gets to review our videos have a lifetime to criticize us.”

“What they don’t see is that we’re human and we want to do a job,” she continued. “That job is to protect our community and that’s what I felt I did that day.”

She thanked Floridians and people across the country for the outpouring of support she received after the crash, especially from runners’ groups and other officers who were involved in crashes on the job.

Now that Trooper Schuck is back on the job, she hopes to inspire other women to pursue a career in law enforcement.

“If I can inspire one young woman … I’m hoping the next generation of law enforcement will include a lot more females,” she said.

Since the crash, Schuck has thrown out the first pitch at the Rays’ opening day game. In Manatee County, March 22 was designated “Trooper Toni Schuck Day” in her honor. 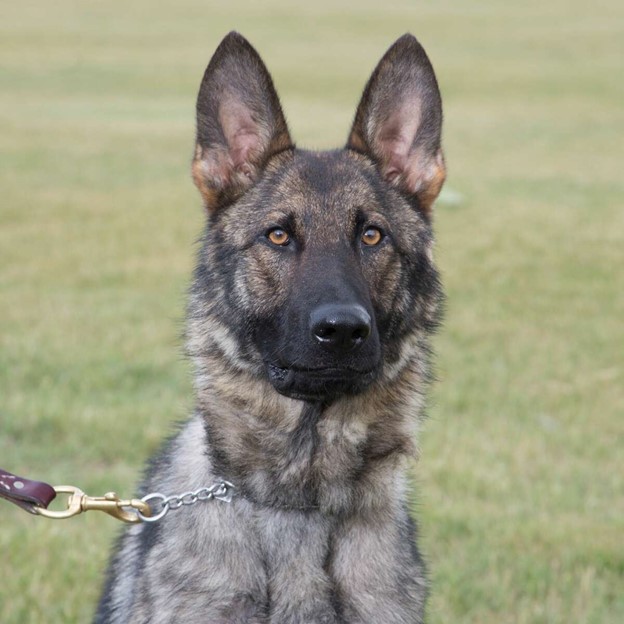 A Michigan State Police K-9 located an 80-year-old hunter whose wife reported he was lost after she heard him shoot several shots while tracking a deer in northern Michigan.

Troopers for the MSP Houghton Lake Post were called around 6:40 p.m. Wednesday to a home on Nash Camp Road in Lovells Township, according to MSP in a Thursday press release.

A woman told the troopers her husband was tracking a deer and hadn't been seen for roughly three hours. She said it worried her when she heard him shoot several shots, which was a sign he was lost.

To help find the hunter, the troopers asked for a K-9 named Loki from the MSP Houghton Lake Post and the MSP Aviation Unit.

Loki and the troopers tracked the hunter about .66 miles north of his home and found him "very cold," according to MSP in the release. He was unharmed, but wet and cold due to falling into the river three times in his waders.

One of the troopers removed his dry fatigue shirt and gave it to the hunter along with his gloves and coat to keep him warm, according to MSP in the release.

The Lovells Township Fire and Rescue unit transported the hunter out of the woods using its canoe. He was then taken to Grayling Munson Hospital for further medical treatment and has been discharged from the hospital in good health.