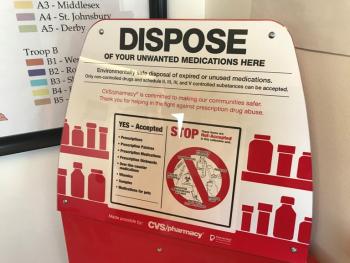 Vermont State Police barracks across the Green Mountain State now have the capability to accept unused and unwanted prescription medication from members of the public year-round. This expansion of secure drop box locations to the lobbies of state police barracks across the state will give Vermonters a convenient and safe way to remove these “most dangerous leftovers” from their homes. The service is made possible through a new agreement with the Lamoille County Sheriff’s Department, which administers the prescription drug take-back program statewide. The federal Drug Enforcement Administration, which spearheads the semi-annual National Drug Take Back Day initiative, then will safely destroy these drugs. Department of Public Safety Commissioner Thomas D. Anderson; Health Commissioner Mark Levine, MD; Lamoille County Sheriff Roger Marcoux; the DEA and others unveiled the new initiative during a news conference Monday at the Vermont State Police barracks in Williston. The Vermont State Police is joining 10 sheriffs’ departments and 39 law-enforcement agencies throughout the state that accept prescription medication from the public for safe, secure disposal year-round. Six of the 10 VSP barracks already have been outfitted with drop boxes. Two more barracks are coming online shortly. Public safety and health officials called the drop boxes a welcome addition to the array of opportunities for people to clean out their medicine cabinets. In addition to kiosks located at hospitals and pharmacies, the Health Department has introduced mail-back envelopes for safe and secure drug disposal. The successful semi-annual state and federal Prescription Drug Take Back Day partnership also will continue, with the next one scheduled for Oct. 27. “This gives us another opportunity to get this poison out of Vermonters’ medicine cabinets,” Public Safety Commissioner Anderson said, noting that state police worked closely with the Lamoille County Sheriff’s Department and the DEA to ensure adequate security and safety protocols are in place at all barracks where prescription drug drop boxes are located. Vermont State Police Director Col. Matthew T. Birmingham and Sheriff Marcoux signed a comprehensive memorandum of understanding to administer the program earlier this year. “Having drop boxes at state police barracks is another way to make it easier and safer for Vermonters to dispose of these potentially dangerous leftover medications,” Sheriff Marcoux said. “Adding the Vermont State Police to the list of law-enforcement agencies with year-round drop boxes shows strong solidarity with other departments and leadership from Commissioner Anderson.” Health Commissioner Mark Levine said one of the keys to prevention is taking unused drugs out of the equation. “We know that many people who misused prescription pain relievers first got them from a friend’s or relative’s medicine cabinet. Drug disposal innovations are important because, while not everyone has the time or ability to get to a drop-off location, almost everyone has medications they no longer need,” Dr. Levine said. “Vermont’s financial and strategic commitment to take on substance-use disorders includes doing everything we can to help stop addiction from starting – and ensure Vermonters who struggle with the challenges of addiction receive treatment and succeed in their recovery.” Since the statewide program began in August 2017, the Lamoille County Sheriff’s Department has collected more than 12,000 pounds of unwanted, unused prescription medication, including some 4,400 pounds so far in 2018.