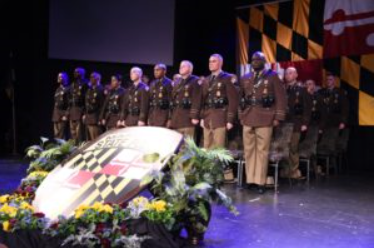 As state officials and proud family members looked on, trooper candidates raised their right hands today and took an oath to serve and protect the people of Maryland as they officially became state troopers during the graduation ceremony for the Maryland State Police 148th Trooper Candidate Class. The 36 members of Trooper Candidate Class 148 have just completed 27 weeks of a residential police training academy, known as one of most intense and comprehensive state police training programs in the country. During six months of strict discipline and a demanding schedule, the trooper candidates received instruction in criminal and traffic laws, emergency care, emergency driving, physical training, and scenario-based training that included de-escalation and conflict resolution. “It is an honor and a privilege to be here today among so many of Maryland’s Finest, and to have this opportunity to congratulate the 36 newest members of what Governor Hogan and I believe is the finest State Police organization in the entire country,” said Lt. Governor Boyd Rutherford. “It is a testament to the kind of men and women here this morning, that even though you knew that the risks would be many and the accolades often too few, you have chosen to join this proud fellowship of MSP troopers.” “For the past 98 years, those who came before you built the tradition and reputation of providing outstanding law enforcement services the Maryland State Police is known for,” Colonel William Pallozzi reminded the graduates. “I urge you to daily remember our core values of integrity, fairness and service as you fulfill your duties as public servants who are dedicated to providing selfless service to our citizens.” In January, Class 148 participated in the Police Plunge for Special Olympics and jumped into the Chesapeake Bay after raising nearly $16,000. Class 148 finished first in fundraising among other participating police academy classes. The president of Class 148 is Jacob Rideout, from the Eastern Shore. He previously served in the US Marine Corps and was a deputy with the Caroline County Sheriff’s Office for six years. Among the members of the class, nine have prior military experience, three previously worked in law enforcement or corrections and five were Maryland State Police cadets. Three are certified paramedics and will be transferring to the Aviation Command following their field training. Nineteen of the recruits have college degrees and another 15 are enrolled in the concurrent Associate of Arts program with Frederick Community College and have been obtaining their degrees as they attend the Academy. Following a brief period of leave, the new troopers will report to barracks across Maryland to begin eight weeks of practical instruction with field training troopers. Upon successful completion of that training, they will be permitted to patrol alone.