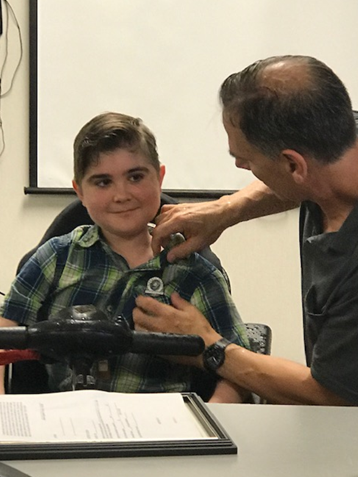 On Tuesday April 9, 2019, The Florida Highway Patrol’s Troop B had a very special guest visit the Gainesville Station.  Evan Procko, a resident of Branford, Florida is 15 years old and is battling Muscular Dystrophy.  FHP Troopers along with the Alachua County Sheriff’s Office and the Gainesville Police Department showed Evan the ropes of a career in law enforcement.  Florida Highway Patrol Captain Barry Tierney started off by showing Evan the FHP MRAP, explaining how it was used in the aftermath of Hurricane Michael in recovery efforts.  K-9 Trooper Corey Burk and Felony Officer Darin Morgan then put on a demonstration with K-9, Rogue.  Gainesville Police Officer Al Moore showed Evan his Harley Davidson Police Motorcycle and Alachua County Deputy Mike Privette presented Evan with an Alachua County Sheriffs Office Medal of Valor pin for the bravery he has shown in his battle against his illness.  Captain Tierney then bestowed the ultimate honor, swearing in Evan as an Honorary Florida Highway Patrol Trooper and presenting him with his Jr. Trooper badge and a certificate from Colonel Gene Spaulding.  Once the day’s events concluded, Evan and his Dad traveled to his weekly treatment at Shands Hospital. Now as a Jr. Trooper!