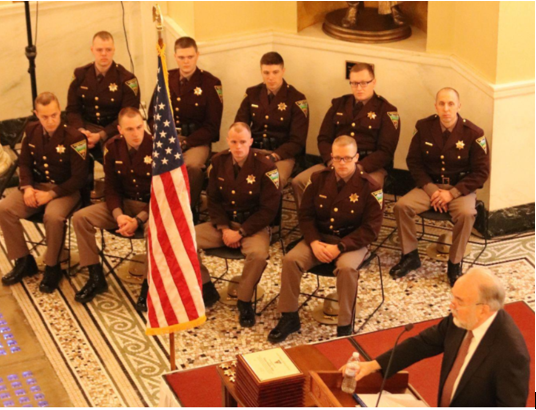 Nine new graduates officially become South Dakota Highway Patrol troopers on April 18. The public ceremony in the State Capitol rotunda in Pierre featured David Gilbertson, South Dakota Supreme Court Chief Justice, as guest speaker. The audience included family members, highway patrol field training officers, and many other guests. Also present were representatives from the American Legion, who co-sponsor the Youth Trooper Academy, where high school students experience for a week the same training as required for highway patrol recruits. This, the 61st class graduation of new highway patrol troopers, follows a full year of preparation. The process started with the recruits making their initial application to the highway patrol. After being selected, they completed eight months of training, which included basic law enforcement training, attending the South Dakota Highway Patrol Recruit Academy, and finally field training. Major Rick Miller addressed the audience, telling of the troopers being trained for split-second decisions, some of those decisions concerning the use of life-threatening force. “Honored families, these graduates need your support. Even if they say nothing, they need you to be there, to be there for them,” Miller said. He told the graduates, “Remember, you will be judged on every split-second decision you make; don’t second guess.” Gilbertson began by reciting the oath taken by the troopers, after they have gone through 33 weeks of intense training, which includes firearms, emotional intelligence, and defusing crisis situations. “Your job is not to fill the jails but to keep the peace. Be prepared to make mistakes, and to learn from them. You will unfortunately see people at their worst, which means you will have to be at your best,” Gilbertson said. “You troopers are on the front line. Have a long, great career, and a long and happy life.”