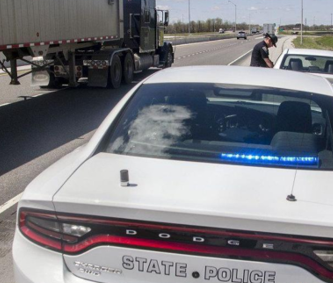 Indiana State Police issued 115 tickets and 194 warnings during a statewide special patrol April 14 through April 20 in which troopers looked for drivers who failed to slow down and move over for emergency vehicles. The most common violation was failure to change lanes for emergency vehicle on a four- lane highway, for which troopers issued 83 tickets and 137 warnings. Indiana 'Move Over Law' effort was in conjunction with police agencies from five other states: Kentucky, Ohio, Michigan, Pennsylvania and West Virginia. State police said that with an increase in construction zones, this was an opportune time to use special patrols not only to find those drivers who violate the law, but to educate the public on the importance of slowing down and moving over for emergency vehicles. Troopers concentrated efforts on all emergency vehicles, including construction vehicles, fire trucks, ambulances, police vehicles, maintenance crews, and roadside service crews. In neighboring Illinois, three state troopers have been struck and killed since the beginning of 2019. In 1999 Indiana was the first State in the nation to pass such a law requiring motorists to move to an adjacent traffic lane, or reduce speed by 10 mph below the posted speed limit if unable to change lanes safely when driving by a stationary police, fire or ambulance emergency vehicle stopped along the side of the road.  Over the years Indiana's law has expanded to include stationary recovery, utility service, solid waste haulers, road, street highway maintenance vehicles, as well as a stationary survey or construction vehicles when displaying alternately flashing amber lights. Indiana’s law was originally crafted and passed the result of the death of ISP Tpr. Andrew Winzenread who was killed in April of 1997 while assisting a stranded motorist on I-74 in Decatur County.