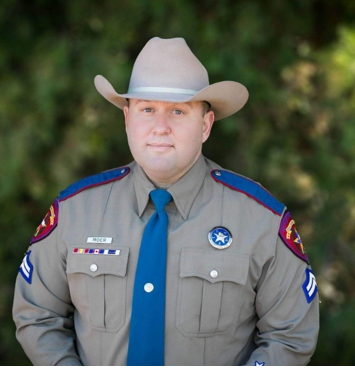 Corporal Joshua Moer, of the Texas Department of Public Safety, has been recognized nationally for his quick and decisive actions when rescuing a kidnapping victim who was also being stabbed repeatedly.

The American Association of State Troopers recognized Corporal Moers’ heroic actions by naming him the 2019 Trooper of the Year for, saving the life of a severely injured kidnapping victim and apprehending the violent assailant as well as keeping the citizens of Wichita County, Texas safe.

On April 26, 2018, Anthony L. Carter kidnapped Kaylea Renee Butts in Norman, Oklahoma. The pair traveled to Wichita County, Texas where a vehicle pursuit involving several law enforcement agencies ensued for approximately 35 miles, and reached speeds up to 150 miles per hour. Near the conclusion of the pursuit Corporal Moer was the lead unit. After assisting officers successfully deployed spike strips Carter’s car came to a complete stop, Ms. Butts exited the vehicle and was chased and tackled by Carter. Carter was on top of Ms. Butts and was violently stabbing her with a large knife. Realizing that minutes mattered, Corporal Moer discharged his pistol at Carter from approximately 40 yards away to stop Carter’s violent assault on Ms. Butts. Corporal Moer’s shot hit Carter, thus briefly delaying the assault. Trooper Aaron Clopton arrived at the scene, exited his vehicle with his patrol rifle. Corporal Moer and Trooper Clopton quickly advanced towards Carter and Ms. Butts. Corporal Moer gave verbal commands for Carter to stop, however, he refused to comply and continued to stab Ms. Butts. Both Corporal Moer and Trooper Clopton discharged their weapons at Carter to stop the aggravated assault. Carter eventually fell off Ms. Butts and died, ending the attack. Corporal Moer had discharged his pistol 11 times striking Carter with each round. After determining that Carter was no longer a threat, Corporal Moer returned to Ms. Butts and started to provide first aid along with other first responders until EMS arrived and transported Ms. Butts to the hospital. Ms. Butts received approximately 13 stab wounds and lost approximately 5 pints of blood. Due to the quick actions of Corporal Moer to stop Carter’s assault on Ms. Butts and the immediate first aid provided to her by Moer and others, Ms. Butts not only survived the aggravated assault, but she made a substantial recovery from her wounds and significant blood loss.

In this highly stressful situation, Corporal Moer displayed leadership and courage that saved the life of Ms. Butts. Corporal Moer maintained his composure and relied on his training while using sound judgement. After the event, Corporal Moer showed compassion, but knew he had based his actions and decision on a deep reverence for human life.  A presentation ceremony will be held on August 8, 2019 in Austin, Texas at the Public Safety Commission August meeting.

AAST would like to acknowledge and congratulate the other trooper nominations for the 2019 AAST Trooper of the Year.