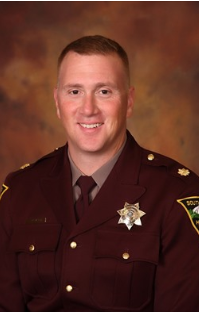 Maj. Rick Miller of Pierre has been named as the next superintendent of the South Dakota Highway Patrol.  Miller is currently an assistant superintendent for the Highway Patrol in charge of administrative services and special operations.  He will replace Col. Craig Price who was named to the position of Cabinet Secretary of the Department of Public Safety by Gov. Kristi Noem.  It was Secretary Price, then as Highway Patrol superintendent, who promoted Miller to Major in 2013.  Miller is a Watertown native and served almost seven years in the U.S. Marines Corps.  He has been with the Highway Patrol for almost 18 years, serving as both a trooper and as a police service dog handler.  “I’m grateful for the confidence that Secretary Price and Governor Noem have in me,” Miller said.  “My goal as superintendent is simple – give our motor carrier inspectors and our troopers the support, training, and resources needed so they can best serve the public and return home safely each night to their own families.”  An official transfer of command ceremony will be held at a later date.  Miller, who will be promoted to the rank of Colonel at that time, will become the 14th Superintendent in the history of the Highway Patrol, which was established in 1937.  The Highway Patrol currently has 193 state troopers and 85 civilian staff.