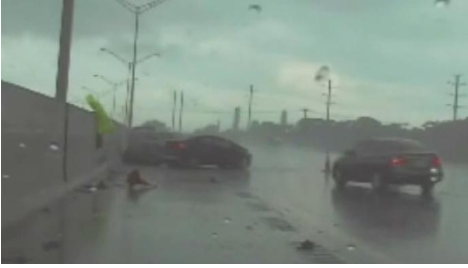 A Florida Highway Patrol trooper had to leap onto a concrete barrier wall on I-95 in Boynton Beach on Monday to avoid a car that was hydroplaning in rainy weather. The trooper, Jeremy Medastin, was treated for an apparent broken ankle and released from an area hospital, FHP spokesman Lt. Alvaro told reporters. Medastin’s dashboard video camera caught the incident on the southbound lane of I-95. Medastin was preparing to fill out paperwork for an earlier crash on inside shoulder of the highway. As he walked back to his patrol car, a vehicle in the right lane hydroplaned, crossed several lanes of traffic before hitting the 7-foot wall, the Sun-Sentinel reported. The car hit Medastin’s leg as he scrambled up the wall. The vehicle also hit the car that had been involved in the previous crash. The investigation is ongoing.

To watch video, go to: https://www.miamiherald.com/news/state/florida/article230388774.html