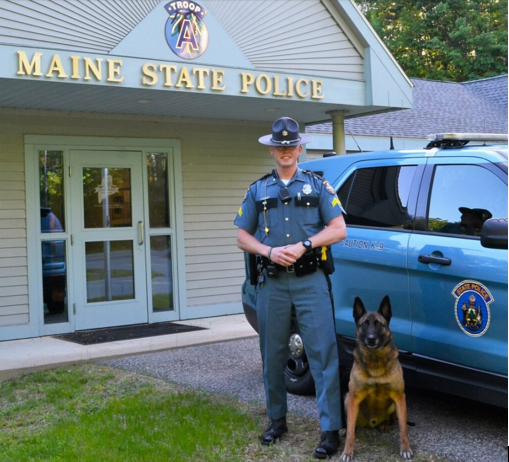 A Maine State Police Troop A corporal who made 70 drug arrests in 2018 has been named Maine State Trooper of the Year.  Cpl. Adam Schmidt received the award in ceremonies at the Maine Criminal Justice Academy in Vassalboro on Friday.  Schmidt, of Lyman, patrols York County with his canine partner “Ibo.”  Troop A is located in Alfred.  As well as the 70 drug arrests, Schmidt and Ibo responded to 184 canine calls throughout 2018, most, but not all of them, drug-related, Maine Public Safety spokesman Steve McCausland said.  A couple of notable non-drug calls included locating a missing person and, in a separate incident, a robbery suspect.  In August 2017, Schmidt and Ibo located an elusive bank robbery suspect in the woods off Lincoln Street in Saco.  The man, who was later convicted and sentenced to seven years in federal prison, had robbed a credit union in Arundel earlier in the day.  In 2016, Schmidt and Ibo found a Waterboro woman who had gone missing from her assisted living residence after a two-mile track in the woods.  Schmidt is a member of the department’s criminal interdiction team and was cited for his ability to seize drugs and drug-related money, as well as arresting drug dealers, McCausland said.  “Corporal Schmidt is a natural role model and he has become a mentor for younger troopers,” said Col. John Cote, chief of the state police.  “His leadership attributed to his promotion to corporal three months ago.”  Schmidt was raised in Sterling, Massachusetts, and joined the Maine State Police in 2013.  He was chosen from a field of 12 officers nominated for Trooper of the Year.