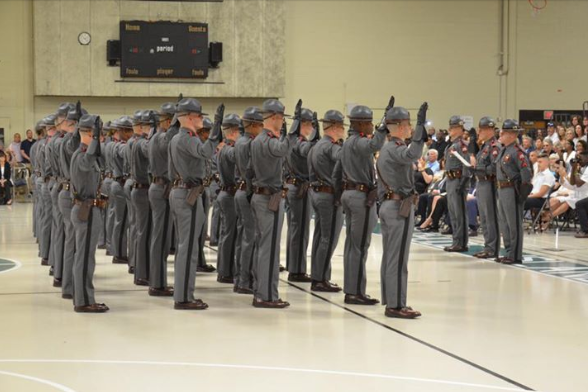 Thirty-seven new troopers on Friday celebrated their graduation from the Rhode Island State Police Training Academy. The ceremony at the Lincoln campus of the Community College of Rhode Island marked the end of 24 weeks of intensive, paramilitary training that began in January. The training included academic and physical fitness components. The 37 recruits were accepted from about 1,500 applicants. Officials described the graduating class as the most diverse in the history of the academy. Seven women graduated — a record in the agency’s nearly century-long history. Of the 37 new troopers, 23 are white, eight are black and six are Hispanic. The 37 new troopers began 24 weeks of intensive, paramilitary training in January. The recruits were selected from approximately 1,500 applicants. The training included rigorous academic and physical fitness components. “I am very proud of these new troopers,” state police Supt. Col. James M. Manni said, according to a news release. “Their educational backgrounds include three associate’s degrees, 29 bachelor’s degrees and two master’s degrees. Eighteen played sports at the collegiate level. Nine previously served as law enforcement professionals, seven served in the Armed Forces and 10 speak a second language.” Manni and Gov. Gina Raimondo addressed the graduates and presented them with diplomas and badges.