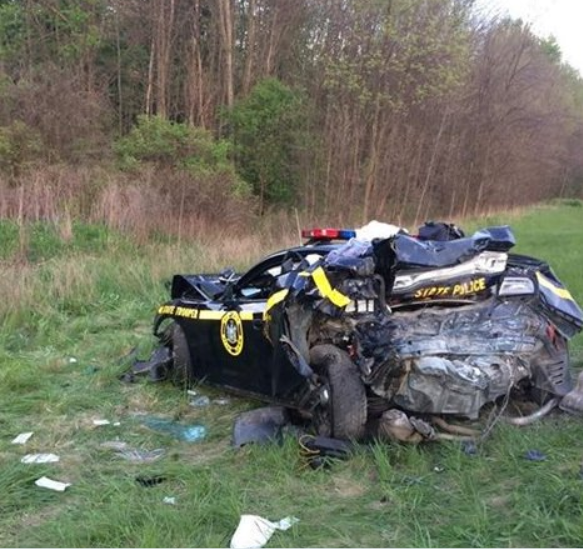 The fact that Craig Foglia survived a crash in May of 2017 is incredible.  The former New York State Trooper was hit by a truck while conducting a traffic stop in Campbell, Steuben County.  He has never shared his story of recovery - until now.  "Being involved in an accident as severe as I was...it's life changing and you learn to fight every day.  If you stop fighting you might not go home," Craig said to 13WHAM's Jennifer Johnson.  With much fanfare, Craig did go home, leaving Strong Hospital two years ago on July 12, 2017.  As he leaves the hospital, consider what we are learning now about his injuries then: a spinal cord injury, a traumatic brain injury, a punctured lung, a lacerated liver and all ribs fractured - some even displaced.  Soon after leaving Strong, Craig started working with his physical therapist - Dr. Chelsea Welch in Corning.  "He is definitely one of the most inspiring patients I have ever worked with," Dr. Welch said of Craig.  Two years after the crash, Craig remains inspiring and positive in the face of major change.  His career began as a deputy in the Monroe County Jail in 2002.  The next year, Craig landed the job he always wanted: road patrol for the New York State Police.  That work assignment took the Irondequoit native to the Southern Tier where he met his wife Kristina.  Life was good. Then came the crash in 2017.  On May 18, 2017, Craig had pulled over an SUV on I-86 West and was sitting in his New York State Police car on the side of the highway when he was hit from behind by a pickup truck.  "I told myself right there that I wasn't going to give up because that's not what we are trained to do," Craig said.  Under the guidance of Dr. Welch, Craig made a lot of progress.  But because of the spinal cord injury, he could not stop scuffing his foot which led to falls.  The insurance company finally cleared him for a device that his Strong Memorial Hospital physical therapist Cynthia Thieleman had recommended months earlier.  It's called the Bioness and it does the work of firing the muscle in his shin to lift his foot. "Bringing the Bioness into play just gave him better stamina to be able to travel anywhere that we want to," said Kristina, Craig's wife.  "Just day to day life was better for him - even six months after he had this."  Craig did want to travel to Texas to see his beloved Dallas Cowboys.  After the accident, he had to delay a tour of the training facility and player meet and greets.  He made it his rehab goal to go on that trip.  They did in 2018.  The same month he had to officially retire from the State Police.  His injuries meant he just couldn't do the job anymore.  That reality still stings.  At times, it tests his spirit.  But Craig teaches us all how to fight through challenges.  "If you're negative about things, it does you no good.  Brings you down," Craig said.  "It brings other people down.  Got to inspire people to keep plugging away.  And be positive in life.  You only have one chance at it and every day is a gift."

To watch video, go to: https://13wham.com/news/local/2-years-after-critical-crash-state-trooper-shares-survival-story?jwsource=cl