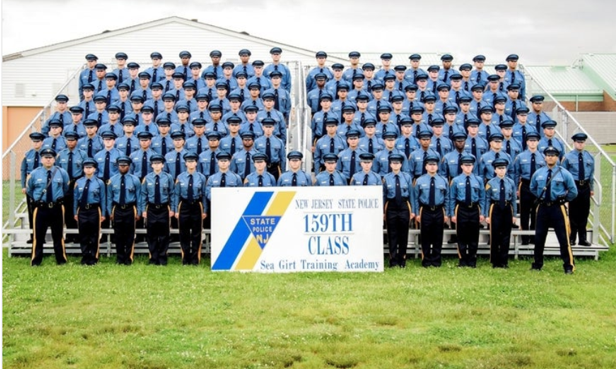 For 24 weeks, they slept, ate and breathed life as a New Jersey State Trooper. On Friday, July 19, 117 men and women received their reward: their trooper badges as the newest New Jersey State Troopers. The graduation of the 159th New Jersey State Police Class, held at the RWJ Barnabas Health Arena in Toms River, included congratulatory remarks from Gov. Phil Murphy and other state leaders, and highlighted some of the work the 108 men and nine women did over the course of the 24 weeks. "For the 159th Class, today's ceremony is the culmination of six months of training from one of the most intensive and challenging law enforcement training academies in the country," Col. Patrick J. Callahan, head of the New Jersey State Police. "I am confident that the graduates are not only prepared for the challenges they will encounter as New Jersey State Troopers, but will serve as exemplary role models and lead by example in all our communities across the state." The New Jersey State Police Training Academy is one of the few residential academies in the nation. Recruits report to the academy before dawn on Monday morning, and they do not return home until dismissal on Friday evening. There is strenuous physical and academic training, consisting of classroom lessons and practical training scenarios. The recruits participated in role-playing exercises such as motor vehicle stops and domestic violence situations, and received detailed instruction from community and cultural organizations on the topic of diversity. Because it is a residential program, recruits are away from their families during significant life events. During this academy class, two recruits got engaged, one recruit got married, and three recruits had children. Of this graduating class, 81 percent have a bachelor's degree or higher, 10 percent are prior military, and 26 percent have prior law enforcement experience. Among the class, 11 are multilingual and 8 are Trooper Youth Week graduates. "Today, we commend the men and women who have answered the call to serve and protect our residents," Murphy said. "I am confident that this new generation of leaders will make our communities stronger and safer, exemplifying the ideals of the New Jersey State Police – Honor, Duty, and Fidelity." "We have great confidence in the ability and commitment of the graduates of the 159th Trooper class to protect and serve residents and live up the highest standards of the New Jersey State Police," Lt. Governor Sheila Oliver said. "We are also grateful that they have chosen to answer the call of public service and to be examples and role models for our communities. May they always lead with integrity, pride, and honor." "Today, these men and women join the ranks of the New Jersey State Police and become part of a proud tradition of honor, sacrifice and service," Attorney General Gurbir S. Grewal said. "They have learned much in 24 weeks, and they will learn much more as they take on the challenges of keeping the people of our state safe and secure, whether it be by patrolling our highways, investigating and arresting criminals, rescuing victims in peril, or other critical duties." The newly-graduated troopers have been assigned to stations throughout the state, and over the next few months, they will begin their careers under the watchful eye of their Trooper-Coaches and supervisors.