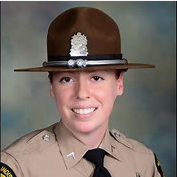 An Illinois trooper killed in the line of duty has been honored on a memorial wall in the Illinois State Police Memorial Park in Springfield. The State Journal-Register reports that friends, family members and colleagues of Trooper Brooke Jones-Story gathered Saturday to add her name. The 34-year-old was killed in March when a semitrailer struck her while she was conducting a traffic stop near Freeport. Attendees also included U.S. Sen. Tammy Duckworth. Separately, there are efforts underway to name a highway overpass in Jones-Story's honor. State lawmakers have approved a resolution to name the U.S. 20 overpass the "Trooper Brooke Jones-Story Memorial Overpass." Her husband, Robert Story, says he chose the overpass because it was in an area where his late wife often patrolled.