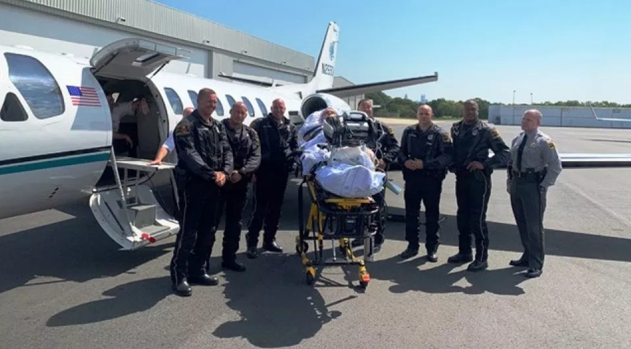 North Carolina state troopers continue to show endless support for their colleague, paralyzed during a chase in Charlotte last month. Members of the Highway Patrol, Charlotte-Mecklenburg Police Department, and medical staff lined the halls of Atrium Carolinas Medical Center on Thursday. They saluted Trooper Christopher Wooten as he left for Shepherd Rehabilitation Center in Atlanta and several members of the Highway Patrol’s Motor Unit escorted Wooten to the airport. Other SHP members joined the trooper and his family as they boarded the medically equipped plane required for the one-hour flight. When Wooten and his family arrived in Atlanta, members from the Georgia State Patrol’s Motor Unit were on site, waiting to escort the family to the hospital. On July 22, Wooten was injured when his motorcycle collided with a pickup truck at the intersection of Tuckaseegee Road and Edgewood Road. “The overwhelming amount of support offered by our law enforcement partners, medical staff, other first responders and the public is unmatched and truly expresses the appreciation for Chris’ law enforcement service,” said Col. Glenn McNeill Jr., commander of the State Highway Patrol. “I want to personally thank every person who has assisted the Wooten family thus far as I know they are extremely grateful.”