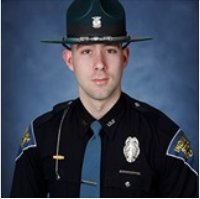 Surrounded by family, friends and law enforcement from Indiana and around the country, Indiana State Trooper Peter “Bo” Stephan was laid to rest. Friday was the funeral, procession and burial for Stephan, 27, who died Oct. 11, involved in a single-car crash while responding to a call for backup in Lafayette. Stephan was stationed with the Lafayette post of the Indiana State Police.  Stephan’s wife, Jessica Stephan, works for the Lafayette Police Department.  The couple has a five-month-old daughter, Harper Stephan.  At 10:25 p.m. Friday, Oct 11, Stephan was going north on Old Indiana 25, south of Stair Road, heading for Americus when his 2018 Dodge Charger police car went off the right side of the road at a curve, according to ISP Sgt. Rick Brown. Stephan’s car rolled at least once and then hit a utility pole.  Stephan’s injuries were fatal, and he was pronounced dead at the scene, according to Brown’s report.  The cause of the crash is still under investigation as of Friday.  His funeral took place Friday morning at Crossroads Community Church, with a procession to the Russiaville Cemetery for his burial afterwards.  Almost 1,000 people attended Stephan funeral at the church, ISP 1st Sgt. Ron Galaviz said, including law enforcement from around Indiana and 19 states, including California, Utah, North Carolina and New Jersey.  Chris Duncan, the pastor of Crossroads Community Church led the service and introduced various people to give remarks on Stephan’s life, including Gov. Eric Holcomb, fellow ISP troopers and his wife, Jessica Stephan.  Holcomb said Stephan’s death was a “painful reminder” of the risk that police and law enforcement take every single day. “Hoosier hearts are still breaking,” Holcomb said.  “While I know too that words provide little comfort, at a time like this, on behalf of a grieving yet grateful state we all offer our deepest condolences.”  Four of his fellow ISP troopers, Devin Farmer, Kevin Jefferies, Steven Grayson and Jeremy Piers gave remarks, giving anecdotes that spoke to Stephan’s personality and love for his career.  Anyone who knew Stephan would say he was passionate about two things: his family and his career, the troopers said.  The love he had for his job stretched through their anecdotes, which featured stories about Stephan in the academy to the oddities that sometimes occurred while responding to calls on duty.  Russiaville resident Jodi Maddox and her grandson were among the people watching the procession pass.  She said Jessica Stephan lived three doors down from her sister and often saw the state trooper car, not thinking anything of it.  “This is a small town, and everybody knows everybody here,” Maddox said.  “I wanted to pay our respects to our local heroes. I thought it would be good for him to see the police officers and everyone coming out to help support the family.”  After the American flag was presented to Stephan’s family by ISP Superintendent Douglas Carter, an ISP helicopter flew overhead.  Then, as hundreds of family, friends and police looked on, his casket was lowered into the ground. Stephan’s wife said during the service that she was initially hesitant about Stephan joining the police, and waited anxiously every day for his “10-41” call, which would begin his tour of duty each shift, and his “10-42” call, which ended each shift.  On the night he died, Jessica Stephan heard him call “10-41,” only for him never to return home with the “10-42.”  Friday, Stephan’s final “10-42”’ call was repeated by Jessica Stephan on the police radio. His watch had officially ended.