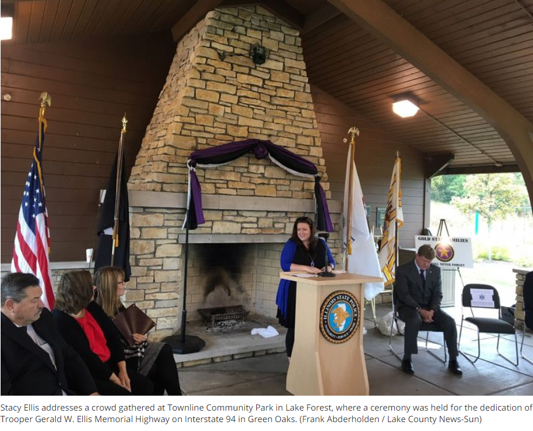 Truck and car horns sounded around mile marker 17 on Interstate 94 Monday morning near the Bradley Road overpass in Green Oaks, where two ladder trucks held aloft a giant American flag to honor Illinois State Trooper Gerald “Jerry” Ellis.  Ellis died March 30 after his squad car collided with a vehicle being driven in the wrong direction on that section of I-94 near Lambs Farm.  On Monday, two large signs naming a half-mile stretch of tollway in his honor were dedicated, with traffic shut down so his family could visit the site.  Acting State Police Director Brendan Kelly, speaking at a portion of the ceremony held inside a pavilion at Townline Community Park in Lake Forest, joked how Ellis might have played a part in Monday’s windy and rainy weather.  “I think Jerry is having fun with us,” he said as people laughed.