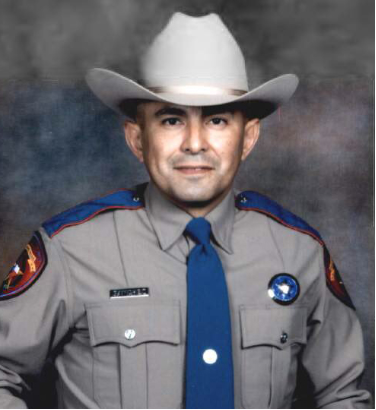 The memory of Texas State Trooper Moises Sanchez lives on as the community has come together to honor the fallen hero Wednesday morning. Six months ago, the intersection of 107 and 10th Street in Edinburg was a crime scene. Today, it was a tribute to the fallen hero. "His memory doesn't come to an end, every single time we put on our uniform, it isn't about us, it's about him and his family," said Sgt. Maria Montalvo with Texas Department of Public Safety. The city of Edinburg approved to rename the portion where Trooper Sanchez was shot in his honor. "As you can see our hearts are still very heavy," said Yvonne Sanchez, Trooper Sanchez's wife. His family isn't the only one still healing. "I remember getting the initial call and as I was making my way over there, dispatch aired out there was a trooper in a foot pursuit and I got closer I heard them say that there was an officer down," said the Edinburg Police Officer who was first on scene. In an exclusive interview with CBS 4 News, she spoke to recounting that night. "I ran to him and applied pressure to his wounds and I was shocked to see one of my brothers down." It is those same brothers that have made sure his memory is never lost. "He chose law enforcement as his career, he chose to sacrifice his own safety for the safety of everyone and we are so grateful for his bravery," said Richard Molina, Edinburg Mayor. For now, every time a car passes Trooper Moises Sanchez Boulevard, they will be reminded of a hero who paid the ultimate sacrifice. "I pray that not only do we remember our father, but we remember all of our brothers and sisters in blue every time we see this street, the time we banded together to support one of our fallen," said Zachary Sanchez, Trooper Sanchez's son. Local state and federal police were all in attendance.