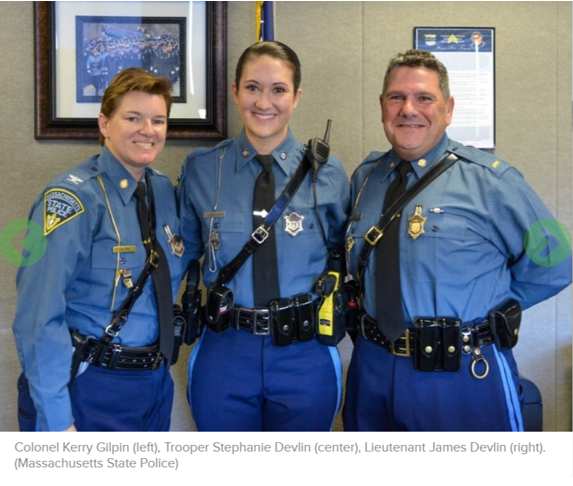 A new State Trooper received a special surprise on Monday when she was pinned with her official Massachusetts State Trooper badge — but it wasn't an ordinary badge, not to her.  Trooper Stephanie Devlin was pinned with her late mother's badge, number 776.  The badge was passed down as a tribute to Delvin's mother and to Delvin's future as a trooper.  Delvin graduated on Jan. 24, 2018 from the 83rd Recruit Training Troop, following in the footsteps of her mother and father.  Delvin's father, James Devlin, is Lieutenant of the MSP's Division of Homeland Security and her late mother worked in Crime Scene Services — Delvin is quite literally following her mothers path, working in the same division and now wearing her badge.  Donna Devlin passed away in 1991 when Stephanie was 16 months old.  The State Police published photos and a post about the tribute, saying "A touching tribute, and a legacy that Stephanie will be able to carry on in memory of her mother."