Vermont State Police take to the skies with drone capability 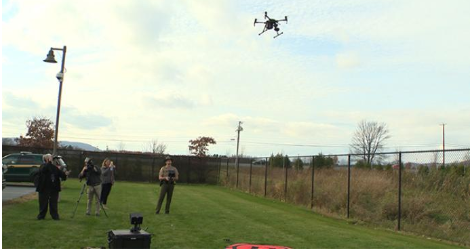 Vermont State Police recently launched a new squadron of 11 drones that they plan to use to assist them all over the state.  But what exactly are they using them for?  With a whine in the air, state police on Wednesday launched a new era of policing from the sky.  After just a few minutes in the air, troopers have a bird's-eye view of a mock crash scene.  "It's giving us a perspective we have never had before," said VSP Trooper Tom Howard. Officials say that over $100,000 in grants paid for the 11 drones and training for the 13 troopers to be certified as drone pilots by the Federal Aviation Administration.  "We are more learning to utilize the drones for accident and crash reconstruction and search and rescue missions," Lt. Cory Lozier said. This could mean less time for the crash reconstruction team with troopers safe and away from the scene, a technique already put to use at an accident last week in Rutland.  "This tool can map that same area that once would take three hours in seven minutes," Tpr. Tom Howard said.  And with tools like thermal imaging cameras, they say the drone could help save lives on rescue missions.  "We now have the ability that we have never had before to locate people once it goes dark," Lt. Lozier said.  VSP officials say the drones could also aid in criminal investigations. But with that view from above, could they invade the privacy of Vermont citizens?  Reporter Ike Bendavid: Will this be used for surveillance?  Lt. Cory Lozier. No, these drones will not be used for any warrantless searches, unless we apply for a warrant.  The American Civil Liberties Union of Vermont agrees that drones can help protect police as long as they are following the law.  "What's important is any use of drones comply with Vermont law.  That does place significant restrictions on when law enforcement can use drones," said the group's Lia Earnst.  She says those restrictions include the use of facial recognition or surveillance of public protests.  VSP officials say they know the law and will follow it.  "We know what we can and cannot do with them -- we will abide by that," Lt. Lozier said.  Making the work of law enforcement quicker and safer -- from the sky.

To watch video, go to:  https://www.wcax.com/content/news/Vermont-State-Police-take-to-the-skies-with-drone-capability-564121241.html?jwsource=cl