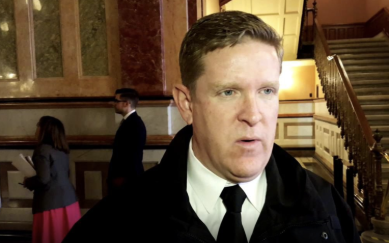 The newly confirmed director of the Illinois State Police said he needs more troopers.  The Illinois Senate voted two weeks ago to confirm Gov. J.B. Pritzker’s nomination for director of the Illinois State Police.  Brendan Kelly has served as acting director of the agency since January.  The Senate unanimously approved Kelly’s nomination.  In Kelly’s tenure as acting director, he has overseen the agency during one of the most difficult years in the almost 100-year history of the agency.  The state police have had a record number of officer deaths this year, plus a record number of troopers involved in traffic crashes that have resulted in injuries.  Kelly said he will serve as the chairman of the “Move Over Task Force,” which he said will be important to implement technology and recommendations to the General Assembly to improve the protection of first responders on state roadways. Looking forward, Kelly said he’s placing an emphasis on growing the ranks of the Illinois State Police.  The police agency employs around 1,700 sworn personnel.  “I’d like to see us get to over 2,000 sworn personnel, pretty soon,” Kelly said.  That's a top priority for Kelly.  "In order to meet the many missions that the public expects us to accomplish, we need the manpower to be able to do it," he said.  "We need people.  It’s not enough to have good ideas and good policies, you have to have the people to do the work."  Kelly recently spoke at the Illinois State Police cadet graduation, which added 57 new Illinois State Police troopers.  Kelly said having regular cadet classes is important.  “We would like to get on the steady stream of two cadet classes a year, and I think we may actually be able to get ahead of that,” he said.  The vision for the new director’s growth won’t just be on the roadways.  Kelly said he wants more people for the state police’s crime lab and other parts of the agency that provide services to local and county agencies across the state.  “I’m very glad to be able to get the governor to sign an executive order recreating the division of criminal investigations, so we can focus on violent crime, drugs and public integrity,” he said.  Kelly said the backlog of DNA testing must be a top priority.  “We have to get at the backlogs that have been epidemic across this country, not just in the state of Illinois,” he said.  He said the backlog in DNA testing for sexual assaults has come down about 10 percent since January.  The DNA backlogs are not the only testing delays Kelly has been focused on.  "But also the drug chemistry backlog," he said.  "Anytime there is a flood of one particular controlled substance like meth, or heroin or fentanyl into a community, there are more cases, there are more substances that we have to test, that can create a bubble."  Most recently, Kelly had served as the St. Clair County State’s Attorney.  He is the eighth director of the Illinois State Police, and he isn’t the first not have prior experience as a sworn officer.  When the director’s position was created in 1987, the first director of the Illinois State Police was Jeremy Margolis, a former Assistant U.S. Attorney.