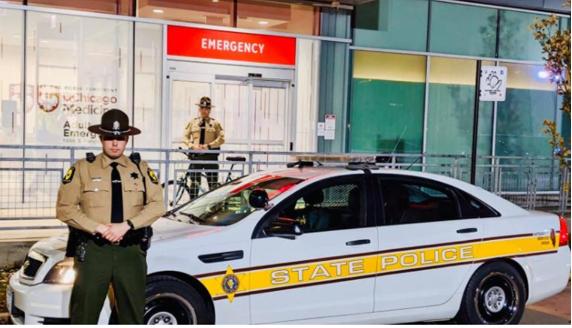 Time was of the essence for two Illinois state troopers. It was a little after 4 a.m. CST Tuesday on Interstate 55 when a vehicle carrying a fresh human heart got a flat tire. Along with the organ going to the University of Chicago Medical Center's Hyde Park campus from the airport: a surgeon, transplant coordinator and medical student. "There is about a 4- to 6-hour window of time for a heart to remain viable for surgery, and the team had already been traveling for approximately three hours," said hospital spokeswoman Ashley Heher. That's when the troopers showed up, responding to a call for a disabled vehicle, according to an Illinois State Police press release. "The Troopers immediately realized this was a time-sensitive situation and without hesitation they transported the three people and the donor organ to the academic medical center," the release said. The delivery was made in time, and the doctors were able to provide the patient with a new heart. "Our District Chicago Troopers were able to turn a potentially bad situation into a thankful ending for at least one family this Thanksgiving holiday," said Interim Capt. Angelo Mollo. "I am extremely proud of our officers who acted without hesitation in this life saving transport."