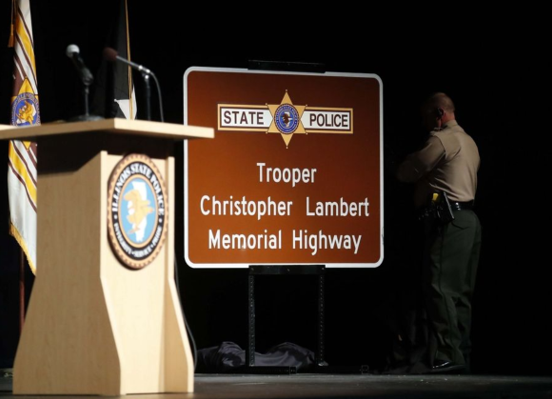 Illinois State Police Trooper Christopher Lambert died protecting a group of fellow citizens on a suburban expressway.  That stretch of I-294 near Willow Road in Northbrook is now named in Lambert's honor, after a solemn dedication ceremony Thursday attended by his widow, Halley, two young daughters and dozens of law enforcement peers.  But his former colleagues hope the sign above the roadway reading "Trooper Christopher Lambert Memorial Highway" serves as more than a reminder of the trooper's sacrifice.  "We hope that as (drivers) see the signs honoring troopers who've lost their lives in the line of duty, it's a daily reminder to drive responsibly," state police Sgt. Jacqueline Cepeda said after Thursday's dedication ceremony at the Rosemont Theatre.  State police say Lambert, 34, lost his life because another driver didn't heed that message.  The five-year state police veteran was on his way home to Highland Park after wrapping up a day patrolling the tollway system on a snowy Jan. 12 when he spotted a three-car pileup on northbound I-294.  A Dayton, Ohio-native who served in the U.S. Army before joining the state police in 2015, Lambert pulled over to help and keep those involved in the collisions safe.  He was standing outside his patrol vehicle when an SUV that failed to slow down or move over struck him.  He succumbed to his injuries later that evening.  "Chris left this world the way he lived, putting the well-being of others above his own," the Rev. Harold Stanger said during Thursday's service.  State police Director Brendan Kelly said Lambert won praise during his time with the agency for his leadership and dedication to serving others, traits that extended beyond his law enforcement work.  "Chris lived a purposeful life, a life of service," Kelly said. "But his most important role was as a loving son, husband and father."