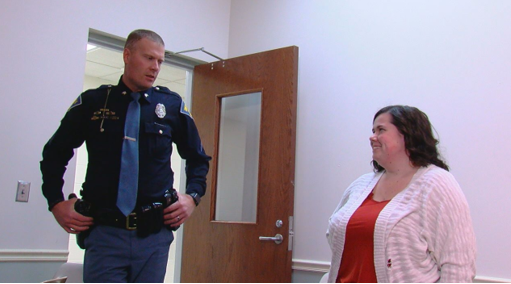 An Indiana State trooper saved a 23-year-old woman trapped inside a car sinking feet below the surface of a pond.  Wednesday, they saw each other again for the first time since the day of the accident.  “One minute I’m on the road, next minute I’m in water," said Megan Fleetwood. Fleetwood said the crash happened fast on her way home from work on State Route 11.  “My contact started bothering me, so I rubbed my eye -- just a completely fluke thing -- and my contact ended up falling out, and so my eyes couldn’t focus," said Fleetwood.  Her car went into the pond, and, within minutes, water was up to her neck.  “I still can’t swim, and I mean, just going through my head was, 'Well, this is going to be bad.'  I can’t get out; the power windows had already stopped working.  It was just panic," said Fleetwood.  By the time Sgt. Stephen Wheeles got to her car, all he could see was the piece of glass on the back window.  “I could obviously see her through the back window, and obviously very frantic that she needed out of there quickly," said Wheeles.  He dove into the water with a hammer that a witness gave him.  “I was very surprised that one hit the whole thing disappeared.  I went to grab for her and she was already halfway out.  She was coming out on her own," said Wheeles.  Wheeles doesn't consider himself a hero.  The rescue is his duty, but he said it's the others involved who made the difference. “She was in the water a lot longer than I was, so I mean, the mental strength that it took her to survive that and keep her head about her in that cold water -- that says a lot about her," said Wheeles.  In that freezing water, Fleetwood said she recognized Wheeles from church.  Out of a really scary moment, the two share an even stronger bond.  “My mom actually passed away last year, and so it was kind of just like -- I don’t know.  We believe in guardian angels.  I don’t know how other people feel, but it was definitely like someone was watching over," said Fleetwood.  Fleetwood suffered a concussion and Wheeles hurt his hand punching through the windshield -- relatively minor injuries compared to what could have happened.