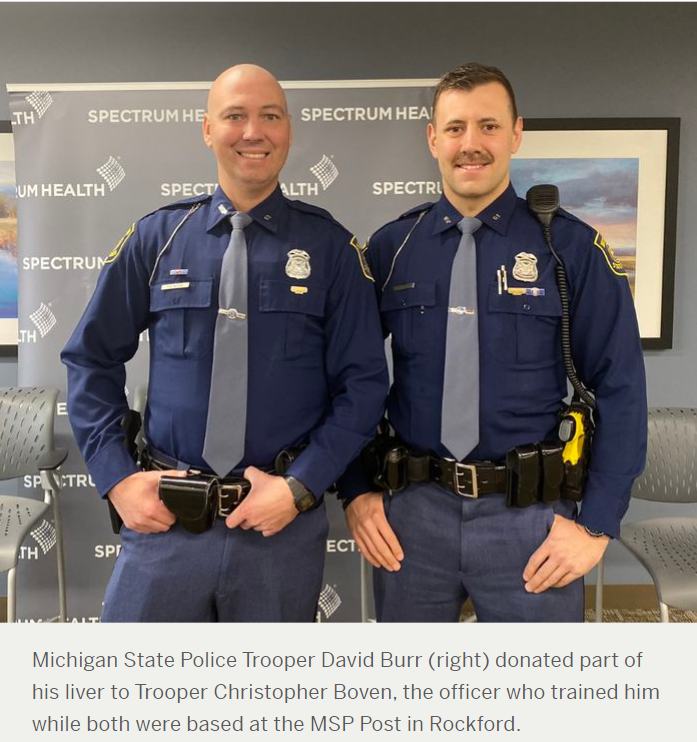 Two Michigan State Police Troopers are healthy and back on the road after one volunteered to be a living donor for the other earlier this year, donating half his liver. Trooper David Burr, 28, of Grand Rapids, donated part of his liver to Trooper Christopher Boven, 37, of North Muskegon, the officer who trained him while both were based at the MSP Post in Rockford.  “It’s kind of the mentality that all of us have, if someone’s in need, we’re going to step up to the plate,” Burr said.  The transplant took place in adjacent operating rooms Feb. 25, 2019 at Henry Ford Hospital in Detroit, with support through Henry Ford Transplant Institute’s Liver Transplant Clinic at Spectrum Health in Grand Rapids.  Transplants can be done with deceased or living donors.  “The beauty of a living donor is it’s 100 percent and we could do it before Chris got really ill,” said Dilip Moonka, Medical Director of the Henry Ford Liver Transplant Program.  At age 13, Boven was diagnosed with primary sclerosing cholangitis (PSC), a rare liver disease. It’s a chronic, progressive condition in which inflammation causes scars within the bile ducts, gradually leading to serious liver damage.  He gave up contact sports and lived symptom-free until 2017 when a thorn bush scratch turned into a series of skin infections that sent his immune system and PSC into overdrive.  Doctors told him in spring 2018 that a liver transplant was inevitable.  Burr’s gift of life came after dozens of Michigan State Police officers and others volunteered for the screening to donate. Boven said he sent an initial email out to inform his co-workers about his medical condition.  “I got a call probably three weeks later from Henry Ford and they basically said, ‘Look, I don’t know what you’re doing, but you need to stop because we’ve got too many people that are signing up,’” Boven said.  A couple troopers, and Boven’s brother, attempted to donate but weren’t a good enough match. It wasn’t until Burr was tested and found to be a match for his former field training officer (FTO).  “Chris was my first FTO right out of the academy,” Burr said. “We both have similar personalities, so it made it easier to learn. We got along right off the bat.”  Both livers regrew to normal size within three months, medical officials said. They both are back at work and healthy.oth livers regrew to normal size within three months, medical officials said. They both are back at work and healthy.