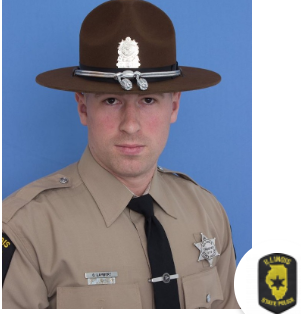 It has been a year since Trooper Christopher Lambert was fatally hit and struck, while handling a crash on Interstate 294 near Chicago. To honor his memory, legacy of courage, and honor and duty, The Illinois State Police have begun a special enforcement, to help people learn more about the Move Over (Scott's) Law. 27 stationary Illinois State Police squad cars were struck by vehicles and drivers in 2019 that violated Scott's Law; two crashes resulted in death of ISP Troopers. That is higher than the number of all ISP crashes of this sort that happened in 2016, 2017, and 2018. “In one of his final acts, Trooper Christopher Lambert placed himself and his squad car between the public and danger. This act of courage is a testament to his noble character and embodies the true mission of ISP, to serve with integrity and pride. We will continue to honor Trooper Lambert’s legacy, and we ask the public to join our efforts. Slow down and, if possible, move over if you see a police or other emergency vehicles stopped along the roadway," said ISP Director Brendan Kelly. It will cost you no less than $250 for a first offense of Scott's Law, and no less than $750 for a repeat offense. If the violation results in property damage, your driver's license will be suspended between three to 12 months. If the violation results in injury, your driver's license will be suspended between six months and two years. The Move Over (Scott’s) Law requires drivers to change lanes when approaching stationary emergency vehicles, including highway maintenance vehicles displaying flashing lights, and any stationary vehicle with their hazard lights activated. The law also states, if changing lanes would be impossible or unsafe, drivers are required to proceed with due caution, reduce the speed of the vehicle and leave a safe distance until safely passing the stationary vehicle.