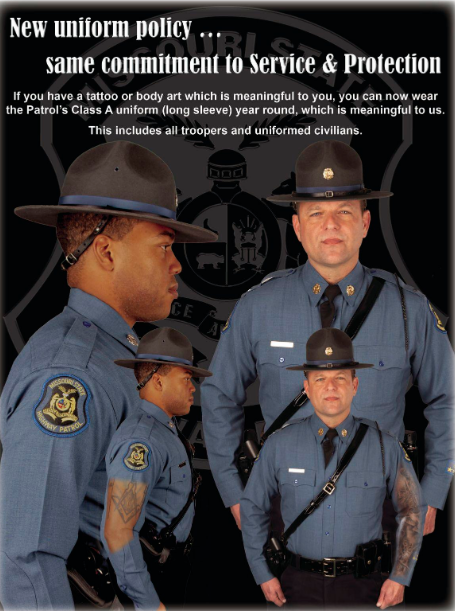 The Missouri State Highway Patrol is amending its uniform policy to allow for tattoos, a move the agency hopes will allow it to tap into a new talent pool.  In a news release, highway patrol officials said the new policy excludes certain types of tattoos and tattoo locations.  “If you have a tattoo or body art that’s meaningful to you, then you can wear our long-sleeve uniform year round,” Lt. Collin Stosberg said.  “This includes all troopers, uniformed civilians, commercial vehicle officers, motor vehicle inspectors and commutation operators.”  Troopers still aren’t allowed to have tattoos on their head, neck, hands, wrists or other areas of the body where they would be visible while on duty.   Stosberg said the new policy isn’t aimed at a certain talent pool, though it’s likely to open up more opportunities for ex-military members and applicants with prior law enforcement experience.  According to a FOX News poll, 36% of U.S. service members have a tattoo.  “The tattoos or brands cannot depict criminal behavior, drug usage, nudity, profanity, promiscuity or bigotry,” Stosberg said.  “This essentially gives a segment of the population the opportunity to become troopers who otherwise couldn’t have.”