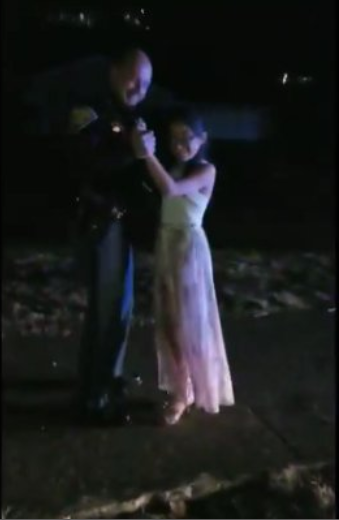 Indiana State Police Sgt. Mike Allen says a call he placed for backup the night of Friday, March 13, in French Lick alarmed another agency’s responding officer.  West Baden Springs Police Department Officer Gideon Ewing, 24, knew to be prepared to possibly pull up to something unpleasant because troopers do not normally ask for backup.  But, instead of summoning Ewing into danger, Allen called him to assist with something else — a sidewalk dance with a young teen girl — that was captured on a popular video being shared on the Jasper Post’s Facebook page.  Allen has served in various capacities during his state police career.  He’s been a detective, had more than 40 negotiations as a hostage crisis negotiator and was deployed out of state while serving on a tactical intervention platoon/riot team.  His current job is night shift squad sergeant.  In that role, Allen teaches his troopers to look past a traffic stop and get concerned about more than just a license, registration and possible citation.  He thinks police should get at why an infraction occurred.  He was practicing what he preaches at 10 p.m. that Friday when he stopped a vehicle for driving with no headlights on French Lick’s Beachwood Avenue, behind a Dairy Queen restaurant.  “We don’t write tickets for that,” Allen says, “but it can be dangerous.”  And, sometimes, a car at night with no headlights can signal impaired driving. Allen learned the vehicle he stopped was operated by 16-year-old Hailey Wilson who was bringing her young stepsister, seventh-grader Selena Mereno, home from a dance.  While Allen got the driver’s information, he noticed a sad-looking Selena wore a long dress and heels.  “She was obviously dressed for a certain occasion that was very formal,” Allen says.  The trooper asked about the event and whether Selena had had a good time.  She said, "Not really."  “It kind of caught me off guard,” Allen says.  “I asked what happened.  She said, ‘Nobody would dance with me.  I was lonely all night.’”  “That tore my guts up,” says the father of three children, including two daughters.  Allen went back to his patrol car to document the stop and write out a warning.  “The more I thought about it, the more it was eating me alive,” he says.  Allen went back to the girls’ vehicle, returned Wilson’s documentation, explained the stop and handed the driver a warning.  He also asked Selena what her favorite song was.  The answer: Dan + Shay’s “Speechless.”  Allen said, “I know it’s cold out, but I’ll dance with you out here on the sidewalk.”  Selena asked if he was serious.  “Absolutely,” he said.  And, with that, Allen went to his car to retrieve his phone.  That is also when he keyed his radio for a transmission that basically told Ewing in cop-speak to meet him behind Dairy Queen.  Ewing says all he knew at that point was that Allen needed assistance at a traffic stop.  And Ewing knows troopers: His brother, Noah Ewing, is also a trooper at the Jasper Post.  Not knowing what lay ahead, Ewing responded, exited his patrol truck and came upon a scene bathed in red and blue flashes that had him remarking to himself: “Is he dancing?”  Wilson started playing “Speechless” for her sister and the trooper, and in the video, there is a pause where Selena says something to Allen.  She said, “I don’t know how to do this.”  Allen said he didn’t either and that they could learn together.  And it wasn’t long before Ewing cut in and did the best he could, too.  “They don’t teach us how to dance in the Academy,” Ewing says.  It would have been nice to have additional officers, Allen says, but it was cold.  And Selena’s reaction makes him think the night was salvaged.  “She was smiling pretty big,” Ewing agreed.  Allen went off shift later and woke up Saturday to discover lots of messages on his phone and bunches of missed calls.  “I thought something horrible had happened,” he says.  Turns out Selena’s stepfather, a very happy and grateful Derek Wilson of West Baden Springs, had posted the dance video, commenting there are still “good people out there!!!!”  “The officers were great,” Derek Wilson said when asked about the incident.  “I know Mr. Allen.  He is a good guy all of the time.”  There had been only four people at the traffic stop: two girls and two cops.  But many more have been able to view what happened.  “It was really unexpected,” Ewing says.  Police officers can build barriers and not let anyone through, Allen says.  Maybe that is a way to avoid having their emotions stirred to the point of having a bad reaction. Maybe they’ve seen too many horrific things.  Maybe they have been around too many people who haven’t been very nice to them.  The video of Selena Mereno’s Friday night gets through to them.  Allen can now say he’s literally heard from hundreds of law enforcement officers from across the country who say the video and the story behind it helped them step back and re-evaluate why they do what they do.  “We got more from that little girl than she got from us,” Allen says.