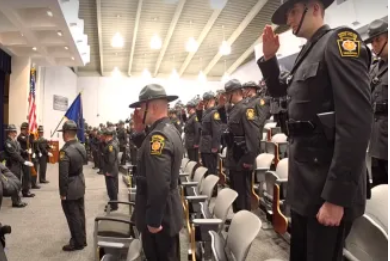 The latest class of Pennsylvania State Police troopers had a graduation much different those of the past.  At the Pennsylvania State Police Academy in Hershey on Friday, March 27, 99 cadets of the 158th graduating class became troopers in a closed-to-the-public ceremony that was streamed live on Facebook.  Graduation ceremonies for the state police are formal affairs usually taking place with cadets’ families watching from the auditorium.  Family members of cadets who work in law enforcement are usually able to present their graduate with their new badges.  On Friday, cadets were separated by at least one seat and practiced social distancing as they accepted their credentials.  No family members in law enforcement were permitted to present badges, but their names were read during the ceremony.  “The men and women graduating today join the ranks at an unprecedented time in our department’s history,” said Colonel Robert Evanchick, Commissioner of the Pennsylvania State Police.  “Friends and family were unfortunately unable to attend and celebrate in person, but we are grateful for their support as our newest troopers begin their public service careers in a period of extraordinary need.”