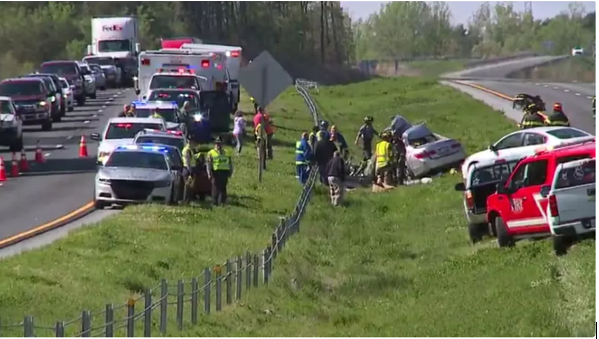 An off-duty state trooper rescued a couple from a fiery crash in Rockingham, North Carolina county last Friday.  “It looked like a bomb went off,” Trooper Alex Chehaitli said.  Metal, burn marks and surgical gloves litter the site where a wrong-way crash turned deadly.  Chehaitli was driving home from the grocery store when he was almost hit by 79-year-old James Pulliam driving south in the northbound lane on highway 220.  He followed Pulliam and tried to get his attention.  “I mean he was doing 60/65 mph never even checked up.  Never even hit a brake or tried to get over.  He was just going straight as an arrow,” the trooper said.  Pulliam hit a Jeep which caught fire along the side of the road.  “Through that Jeep Cherokee like it was nothing,” Chehaitli said.  The trooper ran toward the flames and pulled the 27-year-old driver free.  A bystander pulled his girlfriend out.  “I bearhug him, and he’s like ‘my leg, my leg. I’m stuck.’  I just pull as hard as I can, and I pull him out the window, and we both fall on the ground, and I start dragging him away from the car,” Chehaitli said.  The driver of the Jeep was flown to the hospital, and his girlfriend was taken by ambulance.  Chehaitli says it was an act of God that the couple survived.  “The only reason why they did survive it was because the Honda was lower than the Jeep Cherokee,” Chehaitli said.  FOX8 spoke to the brother of the man who was behind the wheel of the Jeep.  He’s currently in the ICU with very serious injuries.  His girlfriend also has injuries, but they not life-threatening.