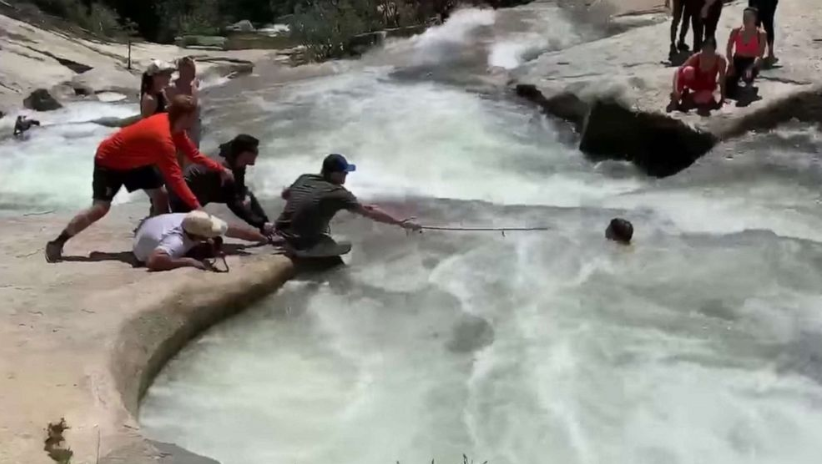 A hiker is lucky to be alive after getting caught in swift river water just as an off-duty California Highway Patrol officer trekking a secluded trail with his wife spotted him and teamed with other good Samaritans to pull him to safety, officials said.  The river rescue drama unfolded on Saturday in the remote Angel Falls wilderness area near Yosemite National Park, the Madera County Sheriff's Office said in a statement.  A 24-year-old Fresno, California, man was hiking in the area along Willow Creek just above Bass Lake around noon, when he tried to wade across the creek, "misjudging the swiftness of the water," the sheriff's office said.  The man, whose name was not released, was quickly knocked off his feet by a strong river current fueled by the snowmelt in the Sierra mountains, according to the sheriff's office.  "The flow overwhelmed and swept him into a whirlpool, which held him under," the statement from the sheriff's office reads.  Here's where the man's luck kicked in.  Brent Donley, an off-duty California Highway Patrol (CHP) officer, just so happened to be hiking on the same trail with his wife, Christina Donley, and saw the man in distress.  Donley is also trained in search and rescue and had ropes with him that came in handy for the life-saving rescue. "The volume of water that moves every second is enormous," Donley told ABC News on Sunday.  "People don't realize."  He said that while the equipment he had wasn't ideal, he worked with what was available to fashion makeshift rescue equipment.  Three men and two women, who were also hiking in the area about 7 miles from the nearest town, Oakhurst, also sprang into action to help in the rescue.  A cellphone video shot by Christina Donley showed her husband tying a rope to a tree branch and tossing it to the hiker a couple of times before the man latched on.  As the other good Samaritans held onto him, Donley pulled the man close to the rocky edge of the creek, and together the group yanked him to safety.  Donley stayed with the man and performed first aid until a search and rescue team from the sheriff's office and an emergency medical services crew arrived and treated the man for minor injuries.  "We sincerely thank Officer Donley for his quick-thinking and preparedness," the statement from the sheriff's office reads.  "This Search and Rescue call could have ended very badly if not for his help."