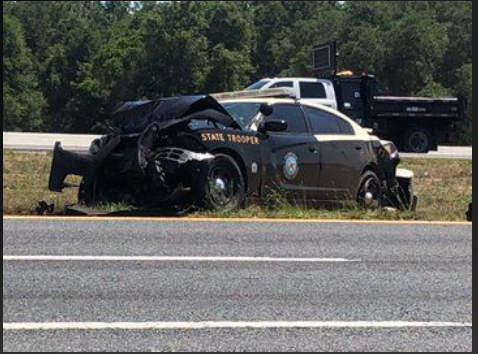 Two Florida Highway Patrol troopers involved in the pursuit of a stolen car out of Alabama crashed their vehicles Tuesday near the I-10 coronavirus checkpoint where authorities have been stopping travelers during the pandemic.  FHP spokesman Lt. Robert Cannon told the News Journal that two state troopers in two separate FHP vehicles crashed into each other shortly before 10:30 a.m. near the checkpoint.  Both troopers were transported to Ascension Sacred Heart Hospital with non-life-threatening injuries.  One of the troopers had to be extricated after he was trapped in his wrecked cruiser, Cannon said.  "A trauma alert was initially issued for the trooper who was entrapped, but both troopers are now listed as in stable condition," Cannon said.