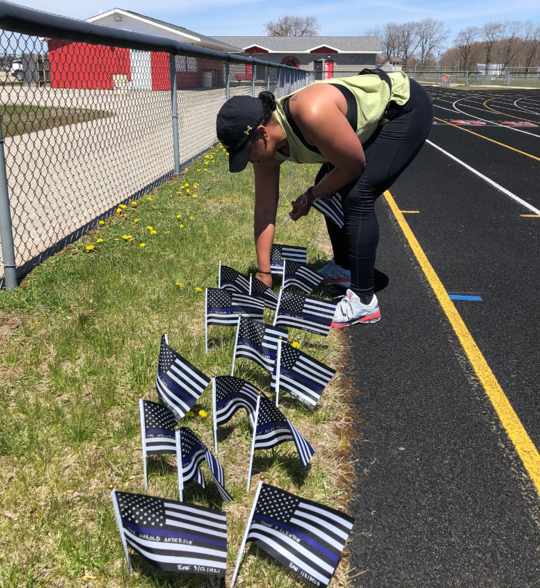 A Michigan State Police trooper recently ran and walked more than 50 miles in a day.  Trooper Cabria Shirley, of the MSP’s Houghton Lake Post, began her run at 8 a.m. on Wednesday, May 13, circling the track at Lake City High School.  By 6:15 a.m. Thursday, Shirley had run and walked the track 212 times for a total of 53 miles.  The number 53 is symbolic, representing the number of MSP troopers who have died in the line of duty since 1921.  Shirley’s run coincides with National Police Week, with Friday, May 15, being Peace Officers Memorial Day.  With each mile she marked, Shirley placed a Blue Lives Matter flag, each bearing the name of a fallen state trooper.  Shirley had purchased the flags and had her fallen comrades’ names added to them herself.  Many of Shirley’s MSP colleagues showed up to show their support, with some running along with her.  Upon finishing her 53rd mile, Shirley was asked why she undertook the grueling endeavor.  “It was a simple decision,” she said.  “The fallen members made the ultimate sacrifice.  Completing those 53 miles was a small token of my gratitude.  I know if given the opportunity, they would have done the same for me.”  First Lt. Travis House, the Houghton Lake Post’s commander, lauded Shirley. “Trooper Shirley has inspired us all,” House said.  “Her efforts on the track have honored our fallen members and their families in a special way.  Her commitment to this undertaking demonstrated courage, and a willingness to sacrifice for others: traits which make her an outstanding trooper and a valuable member of our team at Houghton Lake.”