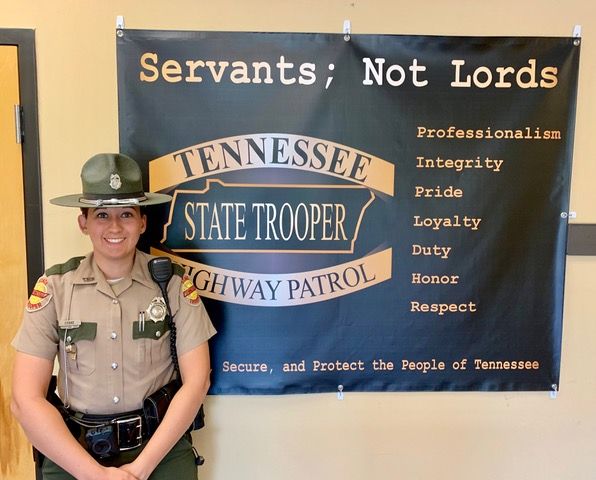 Heather Michelle Cooke has managed to pack a lot of living into 30 years. Around the Tennessee Highway Patrol’s Troop A and beyond she answers to “Cookie.” On the highways of Knox County, she’s Trooper Cooke.

This five-year “veteran” is one of three female THP troopers in Knox County.

In addition to her patrol work, she is a member of the troop’s Strike Team and a crash analyst. She also goes to Nashville and sits on the board that interviews candidates applying to the THP. The Strike Team is involved with manhunts, search and rescue missions, natural disasters, and works protests and riots. Cooke also is a member of the Honor Guard at the annual Fallen Officer Memorial ceremony.

“I have always enjoyed investigating. Working crashes, working hit-and-runs, determining DUI’s and drug interdictions all require digging further and investigating,” she said. “I wanted a job that is exciting and challenges me to think, be patient, and have a good attitude, despite some of the occasional insults we all receive on traffic stops. I love my job.”

How does she describe herself? “I’m a kind person and I like to help people. But I am a Type A person too, a perfectionist, who likes to get everything right and be really organized about everything I do,” she says.

She’s a native of Blount County and still lives there. In 2008 she graduated with honors from Heritage High School, where she played percussion for four years in the Mountaineers marching band. Then it was off to the University of Tennessee, where she earned a degree in 2012 in biological anthropology (she volunteered for two years at the UT Body Farm). Since then she has continued her education – graduating from the Community College of the Air Force in 2016 with an associate’s degree in criminal justice. She is currently working on a master’s in criminal justice with a concentration in forensic science with Saint Leo University.

She says that joining the Air National Guard Security Force helped her choose a career in law enforcement.

Back to her work in Knox County. Are drivers surprised when they realize it’s a young woman under the THP’s classic campaign hat? “A lot of times, yes. I’ve been called ‘Sir’ a number of times. Lots of people say it’s nice to see a female trooper and I mostly get positive feedback,” she said. “Most people don’t give me a hard time, but some people ask me to look the other way and let them go because I’m a woman. A lot of females even try crying on me. But I never, ever look the other way and let them go.”

Cooke says there are two aspects of her job that are scary and hard.

The first is stopping someone on I-40/75, which happens often. “I’ve almost been hit a few times by trucks and cars and had some really close calls. The big rigs that don’t move over or can’t are flying by about 10 feet from me and it’ll blow your hat off,” she says. “We have the Move Over law but many people ignore it or don’t know about it. It’s bad for the wrecker guys and the DOT guys too.”

Also hard is after she works an accident with a fatality or fatalities. It is THP policy that the trooper working the accident notifies the next of kin about the fatality.

“To get to a wreck and see a fatality is a tragedy to witness, but for me, you have to get through the emotions and do your job and not let it get to you,” Cooke says. “There’s no way to describe working one of those and then notifying the next of kin. It’s hard. We take training classes about how to do it. We often go in pairs.”

And then there was the tragic Gatlinburg fire in 2016. Cooke was part of a THP Strike Team sent to help with rescues on Nov. 28. The team members all received the prestigious Lifesaver Award for saving multiple lives that night.

“We were to go in and evacuate people. We were on a road (it was Baskins Creek Road) and came upon a line of cars that were trapped,” Cooke recalls. “The fires were burning on both sides of the road and their tires were melting and embers were flying everywhere and trees falling. It was hectic and intense. One lady already had burns. But we got everyone out of those cars and got them safely off the mountain. One of our guys (Trooper Stephen Barclay) actually carried the woman with burns to safety. I’ll never forget that night.”

Troop A Lt. Eric Miller is Cooke’s supervisor. “She’s a solid trooper and growing all of the time. She really enjoys analyzing and reconstructing crashes,” he said. “Heather is a pro out there. She does her job and does it well. And no, I don’t call her Cookie.”

You can view the original story at https://www.knoxtntoday.com/thps-heather-cooke-is-a-busy-trooper/?fbclid=IwAR2XqbdypviJ3yB8eBxAvDEplI2vILiz3tsVWZDhcJuwsS1svRErW2H89gc