AAST Trooper of the Year 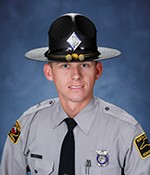 Trooper Daniel C. Harrell, of the North Carolina State Highway Patrol, has been recognized nationally for his courage and commitment during a traffic stop that quickly turned life threatening.