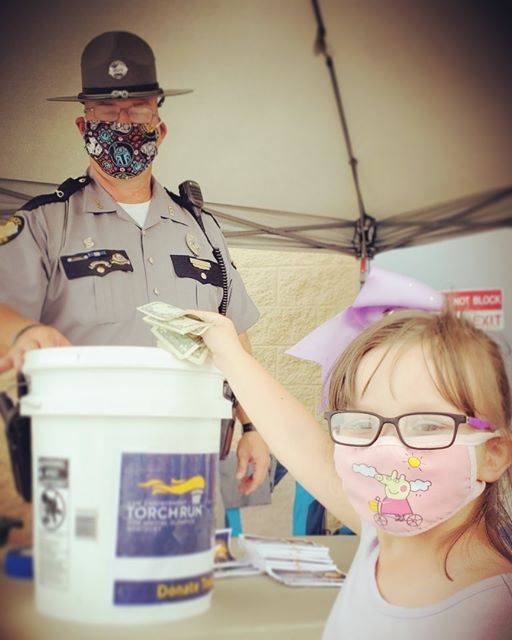 The first Kentucky State Police (KSP) “Cover the Cruiser” event is in the books and raised $16,206.16 to support Special Olympics of Kentucky (SOKY).

KSP posts across the state parked their cruises at designated locations and encouraged the public to cover their cruisers with custom SOKY stickers. A minimum donation of $1 was requested to place a sticker on the cruiser, but Kentuckians donated more than the minimum.

KSP Spokesman Sergeant Josh Lawson gave credit to the troopers who hosted the local 'Cover the Cruiser' events. "Even in the midst of a global pandemic our troopers stepped up and took ownership of this new program, adding it to their long list of community outreach activities," said Lawson. "Whether it was during torrential downpours or sweltering heat they did what was needed, as they always do, to demonstrate their service to the citizens of Kentucky."

SOKY President Trish Mazzoni said the new campaign was a tremendous success. “We are deeply grateful to the Kentucky State Police, all of the Troopers who took part, our host locations and to everyone who donated," said Mazzoni. "Thank you to KSP and to all of the law enforcement community that continues to be so deeply committed to the support of Special Olympics Kentucky Athletes.”

The fundraiser developed into a friendly competition among Kentucky State Police posts*. For this inaugural event, the London Post took top honors with a total of $2,577.94 raised. Trooper Scottie Pennington organized the post fundraiser and battled heavy rain on the date of his event. ”To say that I am humbled by the support and generosity of our Laurel County Citizens is an understatement. Special Olympics of Kentucky holds a special place in my heart and it was an honor to assist them in this way."

Special Olympics is the world’s largest program of sports training and competition for children and adults with intellectual disabilities. The organization has been serving the needs of our athletes and their families since 1970 and welcomes 11,300 athletes in Kentucky.