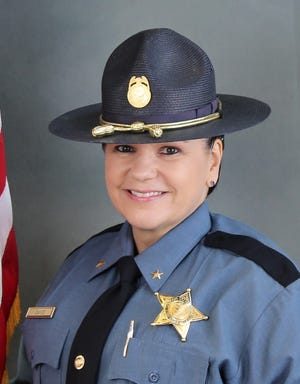 Oregon Gov. Kate Brown on Monday announced her choice to lead the state’s largest law enforcement agency. Terri Davie is a 24-year veteran of law enforcement in Oregon, Brown said in a statement. Davie will assume the role Nov. 1, pending approval from the state Senate. Davie has "a strong record of leading by example,” Brown said. “She brings a focus on inclusivity and is dedicated to listening to community voices—including Oregon’s Black, Indigenous, People of Color, and Tribal communities—as we work towards a more fair and just law enforcement system in Oregon. I look forward to her leadership as we do the hard work of transforming law enforcement standards and training and putting the state on a path toward racial justice.” Davie began her career with the Oregon Department of Corrections, where she was a correctional officer and a lieutenant at the Oregon State Penitentiary. In 2001, Terri joined the Oregon State Police as a patrol trooper assigned to the Albany Area Command. Over the years, Davie has served in many different assignments, including as a major crimes detective, a crisis negotiator on the agency’s SWAT Team, and as a station commander at the Capitol in Salem. She has served as state police deputy superintendent since July 2016. Davie holds an advanced law enforcement certification and is an active member of the FBI National Executive Institute and the International and Oregon Association Chiefs of Police. Previous superintendent Travis Hampton announced his retirement earlier this month. The leadership change comes as Oregon State Police will again start patrolling Portland’s nightly protests against systemic racism and police brutality with help from officers from neighboring communities. That’s part of a plan announced by Brown late Sunday to tamp down on vandalism and violence following a fatal shooting.