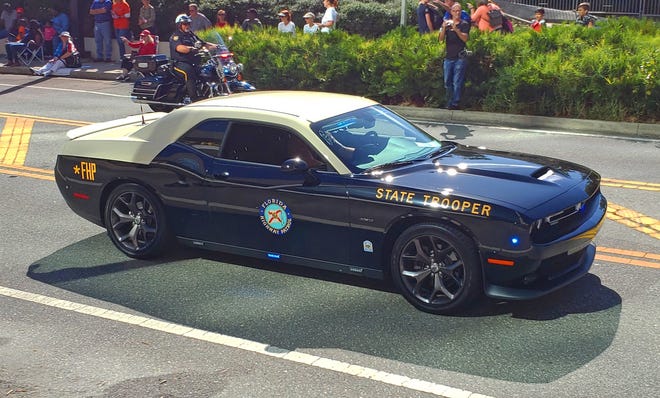 It’s got a HEMI under the hood scoop, a trained trooper behind the wheel and it's right behind that aggressive speeder who just passed you on the Buckman Bridge. Say hello to the Florida Highway Patrol's new friend — a Dodge Challenger R/T with a 370-horsepower V-8 engine under a sleek, yet still familiar black and yellow paint scheme. Jacksonville just received one of Florida's 10 new muscle car cruisers for use in Troop G's Duval County district, which includes Baker, Bradford, Clay, Nassau, Union and St. Johns counties. It's joined by one of 10 unmarked Ford Mustang GTs circulating the state in stealthier shades of white, silver, black, gray and red. The muscle cars are part of a renewed wave of more agile and powerful "specialty vehicles" that can blend in with traffic as they tackle aggressive speeders, Master Sgt. Dylan Bryan said. “Those are the small percentage of people who we want to get, those who are really grotesque with their driving violations and cause a lot of safety issues on our highways,”  Bryan said. “The Mustangs are unmarked, which means there is no lighting on the outside. And the Challengers have been kept in a slick-top fashion, the lights of those vehicles in the interior, so there are no external pieces you would recognize.” Florida drivers may remember that two-door muscle cars sporting the Highway Patrol’s familiar “bumblebee” paint job patrolled highways and state roads in recent years. First were the Fords Mustang SSPs, with more than 15,000 of the notchback coupes supplied to multiple agencies. Florida was the second-biggest buyer of them from 1982 until 1993. They packed a 5-liter V-8 and a certified calibrated speedometer to track speeders. The Highway Patrol also used sleek Chevrolet Camaros in recent years, as well as a few other sports cars like Nissan 300ZXs and Dodge Stealth coupes that it confiscated in raids. The Highway Patrol first showed off the new Challenger late last year in images in front of the Main Street bridge and St. Augustine’s Castillo de San Marcos in a bid to win the American Association of State Troopers Foundation's “America’s Best-Looking Cruiser” contest. It came in ninth to the Nebraska State Patrol's Dodge Charger, then joined 11 other top vote-getters in the association's current 2020 calendar. Troop G’s new Challenger is the R/T model with a 5.7-liter HEMI V-8 good tor a 5.5-second run to 60 mph in the civilian version. The emergency lights are tucked in the top of the windshield and rear window. Other strobes flash from fenders and side windows. It also gets a 360-degree HD camera to record any pursuit for later evidence gathering. "Coming up from behind, it looks like a black Challenger on your back door," Bryan said. The 460-horsepower Mustang GT is one of a number of police vehicles that Ford offers, from one based on the Explorer SUV, to a Transit Van for prisoner transport. Its civilian version can get to 60 mph in just over 4 seconds. The Highway Patrol's unmarked Mustangs also have hidden emergency lighting. Spoiler alert — Jacksonville's is silver, Bryan said. “They are being used more to combat aggressive driving. That's why they have been left unmarked,” Bryan said. “... We have no issues telling the public the color. We want them to see it and know that it's out there working because there are so many drivers who will still do hazardous behavior even with a marked car there." The Highway Patrol Mustangs also carry FHP license plates for an eagle-eyed driver to spot, Bryan said. The Challenger and the Mustang pursuit vehicles were purchased as part of the Highway Patrol's annual budget. They are also receiving a lot of public interest as recruitment tools by the Highway Patrol, as well as a traffic safety public relations tool in parades and events, Bryan said.