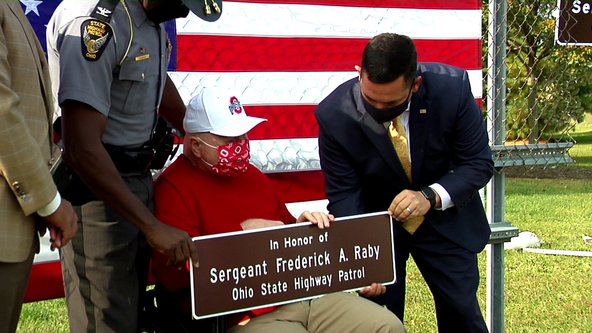 A new Ohio Turnpike sign located at milepost 69.9 westbound in Wood County was dedicated to its namesake Tuesday morning at the Ohio State Highway Patrol (OSHP) Bowling Green Post. Rep. Haraz Ghanbari hosted the ceremony and honored OSHP Sgt. Frederick A. Raby, whose name is featured on the sign, for his bravery in a brush with death 30 years ago. "Just over thirty years ago, on Sept. 1, 1990, State Highway Patrol Sergeant Raby was critically injured in a traffic accident on the Ohio Turnpike near mile marker 70 in Wood County," Ghanbari described. "He was in his patrol car which was stopped behind a violator on the right berm with flashing lights in full operation. Another vehicle traveling at full speed drove off the roadway and struck his patrol vehicle from behind." Raby was life-flighted to the former Medical College of Ohio with severe head trauma, a broken neck, a broken hip and shoulder and leg injuries. "At one point the doctors gave him a five-percent chance of survival. But Fred was physically fit, an Army veteran and he had a strong will to live. He slowly improved and was transferred to a rehabilitation center in Howell, Michigan which specialized in traumatic brain injuries. He spent a year there and was then transferred to the Eisenhower Center in Ann Arbor, Michigan, a longer-term TBI facility where he continued to receive care and therapy." The Ohio Turnpike and Infrastructure Commission Memorial Sign Program has honored 12 people who perished on the job during services for the Ohio Turnpike and OSHP since 2018. Move Over Ohio requires all drivers to move over one lane while passing any roadside vehicle stopped with flashing or rotating lights.