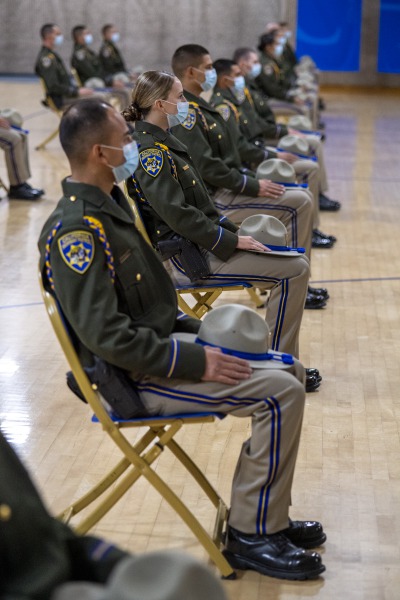 The California Highway Patrol (CHP) congratulates its 77 new officers who were sworn in [recently] during an unprecedented socially distant graduation ceremony at the CHP Academy. The graduating class begins their new career with more hands-on experience than any class in Academy history. As concerns of the COVID-19 pandemic intensified, the CHP closed its live-in Academy in West Sacramento on March 20, 2020. All cadets were sent home and assigned to work in CHP Area offices located as close to their residences as practicable. Prior to leaving, the seven women and 70 men of Cadet Training Class (CTC) III-19, who started October 21, 2019, had completed 23 weeks of their 29-week training at the Academy. During the six months spent working in CHP Area offices throughout the state, cadets had an unprecedented opportunity to observe a wide variety of activities and tasks, enhancing their classroom work. On ride-alongs with officers, they experienced a CHP officer’s shift in the field and learned first-hand how to complete crash reports and assist the public. They also learned the administrative side of the job – filing reports, answering the phone, and performing general tasks that may be unfamiliar to many officers. On September 14, 2020, all members of CTC III-19 who left in March returned to the Academy for their final weeks of training with enhanced health and safety protocols. “We are all so proud of this class,” CHP Commissioner Warren Stanley said. “These cadets faced the uncertainty of the pandemic with resolve and returned to the Academy energized about their new careers, benefiting from a wealth of real-life experience that no other cadets have had.” At the CHP Academy, cadet training starts with nobility in policing, leadership, professionalism and ethics, and cultural diversity. Training also includes mental illness response and crisis intervention techniques. Cadet instruction covers patrol operations, crash investigation, first aid, and the arrest of suspected violators, including those who drive under the influence of alcohol or drugs. The cadets also receive training in traffic control, report writing, recovery of stolen vehicles, assisting the motoring public, issuing citations, emergency scene management, and knowledge of various codes including the Vehicle Code, Penal Code, and Health and Safety Code. Upon graduation, the cadets are assigned to CHP Area offices throughout the state. The mission of the CHP is to provide the highest level of Safety, Service, and Security.