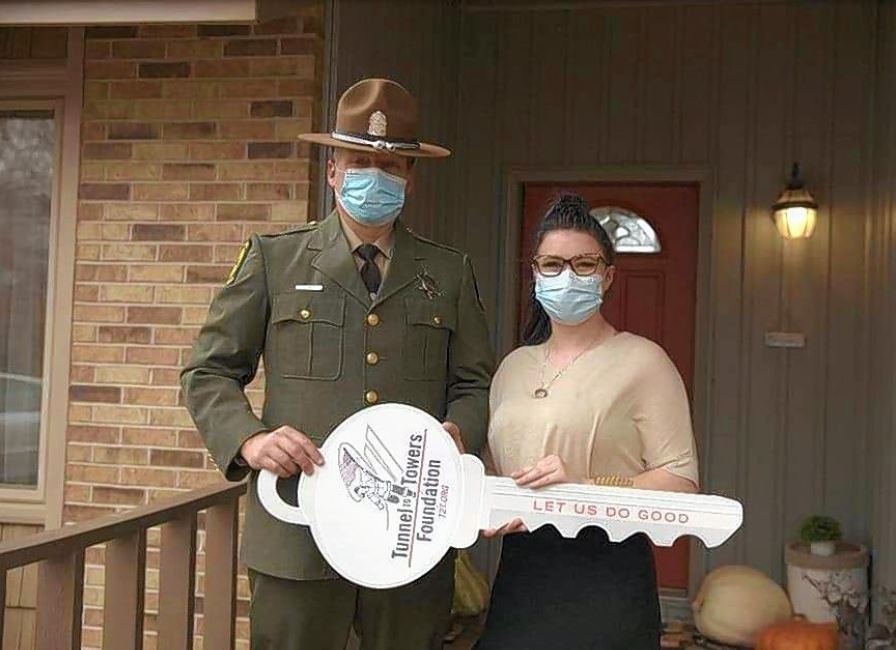 Just a month ago Illinois State Trooper Joshua Hecht organized and ran a golf tournament at the Chester Country Club, raising money to support the Stephen Siller Tunnel to Towers Foundation. The event was a huge success, collecting $10,000 for the foundation. Tunnel to Towers is dedicated to helping surviving family members of first responders and military casualties, and catastrophically injured military members.Hecht became deeply involved with the foundation after the death of his friend and fellow trooper, Nicholas Hopkins. Hecht and Hopkins, both former Marines who served two tours in Iraq each, served together as Illinois State Troopers in District 11 in Collinsville. Hopkins was killed in the line of duty Aug. 23, 2019 while serving a warrant. Hecht's great job with the "Holes Fore Heroes" golf tournament in October earned the respect and interest of Jack Oehm, a former New York Battalion Chief with the Fire Department of New York, who called Hecht a "rising star" with the charity. Oehm was off duty on Sept. 11, 2001 when the twin towers in New York were attacked by terrorists. Oehm spent days trying to recover victims, and lost many fellow firefighters. Oehm, now retired, is now on the board of directors of the Tunnel to Towers Foundation, spends much of his time traveling around the country speaking about the foundation and raising money to support its mission. He also gets the honor and privilege of presenting mortgage-free homes to the recipients of the foundation's services.Following the Oct. 17 golf tournament and getting to know Hecht as a dedicated, compassionate, supporter of the Tunnel to Towers Foundation, Oehm asked if Hecht would be willing to go to Springfield, Missouri to present a mortgage-free home to the wife of a fallen Springfield police officer. "When Jack called I was blown away," Hecht said. "I was extremely moved that the foundation would think that highly of me to give me the opportunity to present a mortgage free home to one of the Tunnel to Towers recipient. He told Oehm to just tell him when and where to go. "Jack Oehm is the man," Hecht added. "He is known across the country for his involvement in this organization. All across the country people are raising money to make these mortgage-free homes possible for families of fallen first responders, Gold Star families and catastrophically injured soldiers, and they picked me to present this mortgage free home in Springfield. I am beyond honored."Tunnel to Towers personnel sent Hecht a binder and two boxes of information, which he dove into for the next two weeks. He talked to his supervisor about taking the time off for the trip, who was proud that one of District 11's own had been selected. His only response to Hecht's request was to ask, 'Do you want a marked car or an unmarked car?'" Hecht said. Hecht was going to Springfield Nov. 10 to meet with the widow of Springfield Police Officer Christopher Walsh, who was shot and killed in the line of duty March 16, 2020 when he ran into a convenience store to stop an active shooter. He died trying to save injured civilians. Walsh had been on the department for 3½ years. Prior, Walsh spent a decade in the U.S. Army and Army Reserves, serving in Operation Iraqi Freedom and Operation Enduring Freedom. Altogether Walsh served two tours of duty, both in Iraq and Afghanistan. Walsh left behind a wife, Sheri, and their 10-year-old daughter, Morgan. Sheri and Christopher Walsh were high school sweethearts and had been together since they were 16 years old. Sheri, who runs a private business, was worried she'd have to give it up and take a more lucrative job to provide for herself and her daughter and keep the house. The family bought the house three years ago and there was 27 years remaining on the mortgage. With Tunnel to Towers paying off the mortgage, Sheri and her daughter are now secure. "Sheri was very appreciative," Hecht said, and believes now that she can continue her small side business and pay the bills." That same Veterans Day week, the Tunnel to Towers Foundation paid off the mortgages for 11 homes across the country in total, in Washington, Idaho, Colorado, Louisiana, Georgia, North Carolina, South Carolina, Pennsylvania, and Missouri. Hecht was so moved by the experience he hopes it leads to other opportunities with the Tunnel to Towers Foundation. "I can't say if I will be asked to make more presentations in the future, but I think that they were pleased with my efforts and that it is a possibility that I may have another opportunity down the road," Hecht said. "I really enjoy reaching out to those who have experienced such terrible tragedies in their lives and if given to opportunity to help improve their situations, I would surely accept the offer to do so." Hecht and his wife Courtney and children, Kinsley, 8 and Karson, 4 live in Chester. The entire family is supportive of his efforts with the Tunnel to Towers Foundation and he has the full support and admiration of each of them.