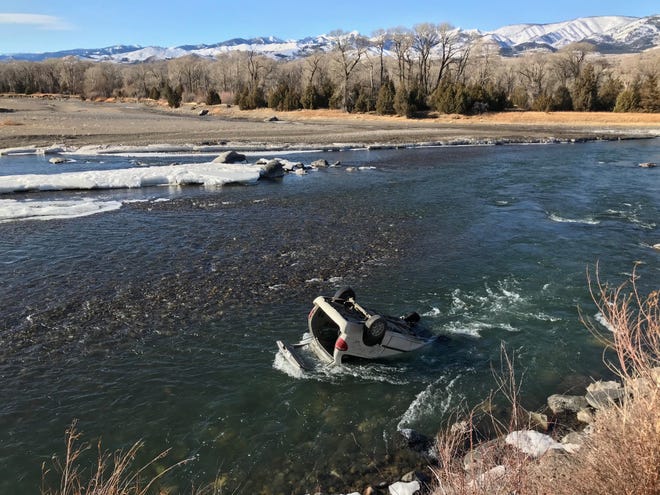 A Montana Highway Patrol trooper took an unexpected swim Thursday to rescue a woman from a vehicle that overturned in the Yellowstone River. Trooper Connor Wager responded at around noon to a report of a rollover crash on River Road in Park County near Emigrant. When he arrived at the scene, he found a vehicle on its roof with the front end completely submerged in the river, according to the MHP Facebook page. The driver was trapped inside the car in water temperatures near freezing. Wager tied himself to a rope and waded through the fast-moving river until he reached the vehicle. The rear hatch could not open due to the strong current, so Wager used a rescue tool to break out the rear window. Wager was able to pull the woman from the car, and a group of first responders on the shore pulled them both to safety. Emergency Medical Services treated the woman at the scene, and Wager was treated for minor injuries at Livingston HealthCare and released. MHP thanked Wager for his heroic efforts in the Facebook post, but Wager's praise went to the Park County first responders that pulled him and the woman to shore. "I think anyone would've done it," Wager said. "I don't need to be in the spotlight."