Baby Named After Indiana State Trooper Who Helped Deliver Him 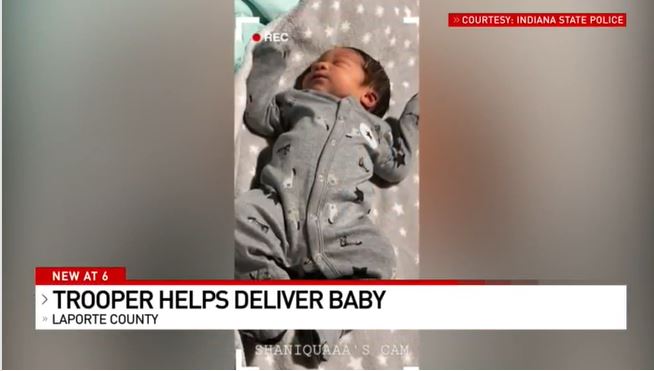 An Indiana State Police trooper helped make an unexpected delivery on Friday when he helped deliver a baby on the toll road. According to a release, Trooper Thomas Maymi was on duty on the Indiana Toll Road around 12:30 p.m. when a man driving a semi stopped on the side of the tollway, ran across the road, and asked for help. The man told Trooper Maymi that his wife was pregnant and in labor. According to police, Trooper Maymi called for an ambulance and then went to the truck to help. He quickly realized the woman would not have time to make it to the hospital, and began helping her deliver the baby. Baby Malaki Thomas Robertson was born quickly, two minutes after LaPorte County EMS arrived on scene. After delivery, both mom and baby were transported to LaPorte Hospital. Parents Shaniqua Traywick and Carl Robertson gave their new baby the middle name Thomas, after Trooper Thomas Maymi. According to the Indiana State Police, the family is doing well. Trooper Maymi says he was glad he was there to help and wishes them congratulations.