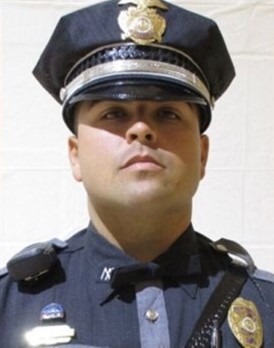 A New Mexico State Police officer was shot and killed during a traffic stop on Interstate 10 near Deming on Thursday. Darian Jarrott, 28, a New Mexico State police officer, stationed in Deming, New Mexico was assisting Homeland Security Investigators. Jarrott conducted a traffic stop on a white Chevrolet pickup truck on I-10 eastbound, near mile marker 101 east of Deming, New Mexico. During the traffic stop, the driver identified as 39-year-old Omar Felix Cueva fired at least one shot at Jarrott. Jarrott was struck and killed by gunfire. An HSI agent arrived on the scene and notified New Mexico State Police dispatch that an officer was down. A broadcast of the shooting was issued throughout the state and to local agencies. A New Mexico State police officer saw Cueva driving east on I-10 near mile marker 116. Cueva pulled over at the exit and fired at New Mexico State Police officers - officers returned gunfire. A pursuit was initiated as Cueva continued to evade officers. During the pursuit, other New Mexico State Police officers used a tire deflation device which blew the tire on Cueva's pickup truck near the Picacho exit on I-10 and near milepost 135 by Las Cruces, NM. Cueva continued driving on the interstate with Las Cruces and New Mexico state police, Dona Ana County Sheriff's deputies and Border Patrol following. Video of the suspect in a shoot-out with law enforcement was recorded by a witness, Austin Contreras. Authorities used a pursuit intervention technique maneuver to stop Jarrott's pickup truck. The chase ended in Las Cruces. Cueva got out of the pickup truck and fired a weapon at law enforcement - they returned fire, killing Cueva. The video obtained by KFOX14 was edited to not show the graphic footage. Officers rendered aid to Cueva until emergency medical personnel arrived on the scene. Cueva died at the scene. One Las Cruces Police officer was struck by gunfire. The officer was airlifted to a trauma hospital where he was treated and later released. Jarrott began his career as a Transportation Inspector with NMDPS. He was certified as a law enforcement officer in December of 2014 and worked with the former Motor Transportation Division of NMDPS. In July of 2015, he was sworn in as a New Mexico State Police officer. Jarrott leaves behind three small children and was expecting his fourth child this year. Cueva was heading to Las Cruces for a drug deal. Cueva resided in Deming, New Mexico. A search warrant is being served at the home of Cueva. He has a violent criminal history. Cueva's drug criminal charges history includes vandalism in 1994, possession of a controlled substance in 2000 and 2001, importation of a controlled substance in 2002, importation of cocaine in 2004, fictitious check, false check, burglary in 2006, probation violation in 2007, importation of a controlled substance in 2008, possession with intent of crystal meth or ICE in 2010. It’s a huge loss to us,” said Chief Robert Thornton with New Mexico State Police. “I want everybody to know I love each and every one of our officers. I-10 near Las Cruces reopened Friday morning after being closed as part of the investigation. This investigation is active and being led by the New Mexico State Police Investigations Bureau The identities of the deputies, officers, and Border Patrol agent involved will not be released until all interviews are completed. The New Mexico State Police officers have been placed on standard leave. A police escort took place in Deming Thursday night for the fallen New Mexico State Police officer who died in the shooting in Luna County earlier in the day. Thursday's deadly shooting comes a day after a Las Cruces police officer shot at a suspect who fled in a vehicle while dragging another police officer. Gov. Michelle Lujan Grisham on Thursday announced she will order all flags to half-staff in the state of New Mexico, beginning Friday, in mourning for the New Mexico State police officer who was killed in the line of duty.