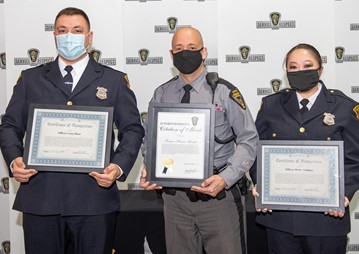 Trooper Morales was given the Superintendent's Citation of Merit. Officers Madaras and Rose were presented with a Certificate of Recognition at the Patrol's Cleveland District Headquarters.

On Jan. 23, 2021, a resident told Trooper Morales that there was a house fire in the 3700 block of W. 47th St. in Cleveland. Residents also told the trooper that there was a man in a wheelchair who lived in the house next to the burning home.

The fire was spreading rapidly, so Trooper Morales entered the home. That's when he saw an elderly woman trying to help and elderly man, whose wheelchair had gotten stuck in the doorway. Trooper Morales was able to guide the couple outside, giving them instructions in Spanish because they were not proficient in English.

As that was happening, Cleveland Officers Madaras and Rose also arrived on scene, and assisted in getting the couple out of the home and to safety.