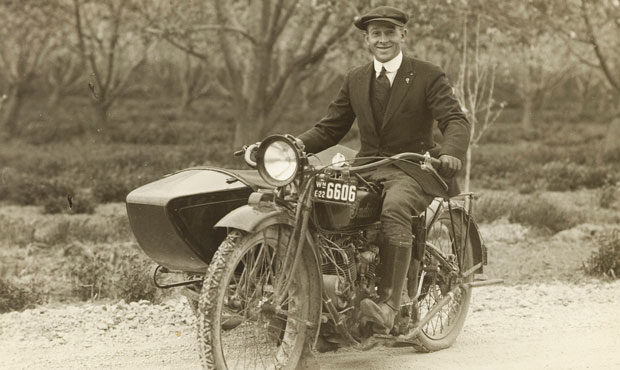 Washington State Patrol (WSP) is marking its centennial in 2021. Like so many things lately, the commemoration has been scaled back and reshaped because of the pandemic.

The WSP is a large and complex modern law enforcement agency, with 2,300 employees, about half of whom are commissioned officers. Those officers are the most visible aspect of the WSP along the state’s highways, but staff also investigate cybercrimes, conduct inquiries into state agencies, and are also tasked with homeland security efforts and the occasional special project. That includes protecting the 2,500 international athletes who were here in 1990 for the Goodwill Games.

But that most visible aspect of the WSP in 2021 – highway safety and law enforcement – is where the agency has its roots and its earliest history.

It was just about 100 years ago –  in the spring of 1921 – when the state Legislature created the Washington State Highway Patrol. This was not long after World War I, a period of major growth for automobiles and an expanding network of streets, roads, and highways. Horse-drawn wagons were still in use in cities and towns, but trucks were taking over the industry, and Americans were buying increasingly affordable Model-Ts and other early passenger cars.

Even rudimentary pavement on what had previously been dirt roads was making highway travel safer in some ways, and somewhat more predictable across Washington. At the same time, cars were getting faster – able to reach speeds as high as 45 miles per hour – and everything about travel by road in those pre-seatbelt, pre-safety glass, pre-airbags era was getting more dangerous and often more deadly.

Chris Loftis is director of communications for the Washington State Patrol. He acknowledges that these are intense times for law enforcement, and he says that like any agency right now, the WSP is in the midst of adaptation and evolution.

And while that modern history is being written in real-time, Loftis told KIRO Radio that the early years for what’s now the Washington State Patrol began officially on Sept. 1, 1921, when the first cohort of 16 officers – most of whom were World War I vets — were dispatched from Olympia to various areas around the state, along the early highways where traffic safety was a growing concern.

Each officer rode an Indian motorcycle, Chris Loftis says, and each of those motorcycles was equipped with a sidecar.

“And in their side cars they carried enough clothing and supplies for sometimes months long deployment,” Loftis said. “Every member was charged with patrolling at least two, sometimes three, and sometimes even four counties by themselves.”

With so much territory to cover, officers weren’t exactly able to go home every night, Loftis says.

“They slept out of those sidecars,” Loftis said. “They had tents. They had sleeping bags. They had their guns, their ammunition, and their citation booklet. They didn’t have uniforms for another three years, but they literally hit the road.”

Though they didn’t have uniforms until 1924, the officers did have armbands to wear over their civilian clothes in order to identify themselves to the motorists they pulled over for speeding or other safety violations. And, along with a tent and sleeping bag, the officers also carried a shovel in the sidecar, because part of the job was to fight any fires they happened to come across.

In December 1923, the Seattle Times profiled L.D. McCardle, who directed the Washington State Highway Patrol during its early years.

Rather than “speed cops,” McCardle told the Times, the officers “might better be called educators to the motoring public, because they make a special effort to explain the law to violators and set drivers at rights, rather than to arrest them.”

McCardle told the newspaper he’d looked north of the border for inspiration in structuring a law enforcement agency for the Evergreen State.

“When the job of organizing the patrol force was given me, I took the Northwest Mounted Police of Canada as my ideal and built up my force along the lines used by that organization,” McCardle said. “The results have been satisfactory.”

The 1920s saw the number of officers grow and the standard equipment improve; in those years, funding for the agency came from drivers’ license fees, and the number of licensed drivers was increasing as cars became more and more indispensable. Along with traffic safety, commercial vehicle weight limit enforcement and vehicle safety inspections, Chris Loftis says that more duties were assigned during a real watershed moment when the Washington State Highway Patrol was about a decade old.

That was all in the early years of the Great Depression, a time of marked civil and economic unrest.

During those Depression years of the 1930s, even that newly empowered agency was still fairly old-school in its management style and outlook. For instance, it would be decades before the WSP hired their first Black trooper in the 1960s, or the first female troopers in the 1970s; like so many other entities, WSP was a white male-dominated public agency.

And Loftis says that in those pre-World War II years, the hiring process could be fairly politicized, too.

“But by the time you got to that World War II time frame,” Loftis said, “you really have a very organized, thoughtful group.”

World War II was another milestone in the early years of the Washington State Patrol. There were huge increases in civilian traffic on the highways, with a big influx of population from all over the country who were moving here to take jobs at Boeing, at shipyards and at other defense plants in Seattle, Renton, Vancouver and other communities around the state. And the military was on the move in an unprecedented mobilization, shuttling people, supplies and equipment to the bases, barracks, airfields and depots that were popping up all over the landscape.

And not unlike the military, one constant focus for law enforcement in general — which is also a significant part of the State Patrol centennial – is honoring those who have died in the line of duty. In the past 100 years, a total of 31 Washington troopers or patrolmen have joined the ranks of what WSP calls the Fallen 31.

Chris Loftis knows all the stories of the Fallen 31 by heart, including 29-year old Patrolman Gene Bolstad. Bolstad had been with the State Patrol for less than three years when he died on Sept. 3, 1957, in the surf at Long Beach where two teenagers had run into difficulty.

“He rescued one teenager,” Loftis said. “He dove in, came up to the scene, [wearing his] wool uniform, gun belt, boots, the whole thing. [He] comes up to the scene, dives into the cold water at Long Beach in that full outfit [and] saves one young man.”

“And then, I think the most heroic thing is, you’ve got to know how tired he had to be, and then he went back — he and the second young man drowned,” Loftis said.

“That act of going back, even when he had to have felt the fatigue and the fear and the worry and the cold and he went back,” Loftis continued. “That story, I think, is emblematic of who the Washington State Patrol is.”

“You’ve just got a lot of men and women who just keep going back into harm’s way,” Loftis said.

To commemorate the centennial and the fallen officers, WSP had planned a traveling exhibit that would’ve been featured at each of the agency’s eight district offices around the state, but the pandemic put a stop to the traveling component. However, an annual display in Puyallup at what’s now the Washington State Fair will be much bigger this year than in the past, assuming that the fair will take place.

“They’ve given us a much larger footprint, a much larger building, and we’re going to be working over the summer to put a lot of our old vehicles, old uniforms, just a lot of memorabilia from the last hundred years [on display],” Loftis said. “So if you come to the fair in Puyallup this year, you’ve got to come to the to the new State Patrol Museum.”

Leading up to that September fair, Chris Loftis says there may be some blue lights illuminating government buildings, and centennial messages on those highway reader-boards positioned around the state.  On September 1, which is the actual 100th anniversary, there’ll be a parade of vintage vehicles from State Patrol offices in Olympia to the fairgrounds in Puyallup.

All these special centennial activities are fine, says Loftis, but he believes there’s something more important than a display or a parade or colored lights, and which happens to be visible to Washingtonians every day.

“The biggest thing is that you’re going to see what you’ve seen for the last hundred years,” Loftis said. “You’re going to see men and women on the side of the road doing their job, and that job is to slow you down and to keep you safe.”

“There’s three things that we’ve got to do,” Loftis continued. “If we’d all slow down, if we’d all pay attention, and if we’d never drive impaired –  if we’ll do those three things, we’re going to save a lot of lives this year and every year for the next hundred.”

Ephemera collectors will be disappointed, but Loftis confirmed that citations being handed out to speeding motorists in this centennial year do not feature a commemorative 100th anniversary logo.

Loftis also emphasized that claiming you’re “attempting to reach 100 miles per hour in honor of the centennial” is never a valid excuse for breaking the traffic laws of the Evergreen State.