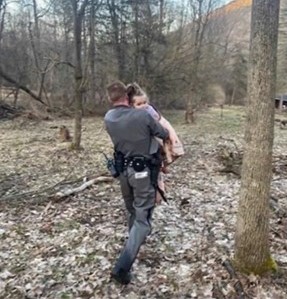 Brian Hotchkiss said when state police received the call for the missing girl, he knew they were fighting against the clock.

"These missing kids, it can go really bad. It's time sensitive depending on the time of year, so although it was a nice day the temperature was dropping," he said.

He and the other members of law enforcement knocked on neighbors' doors, but as the sun began to set, they knew they had to make a decision fast. So, Hotchkiss and two other troopers decided to climb the mountain a half mile from the girl's home.

Hotchkiss said it took him an hour to get to the top and he was "winded" by the time he was done. At first all he saw was grey and brown in the trees.

But then he saw a pink dot. He knew it was her.

"I followed the stream and I located the child, she was lying on her stomach on a rock, and I ran over as quick as possible and I saw her arm move and I knew she was alive and my heart just dropped. I was so excited, I ran up she hugged me immediately, she wouldn't let go," he said.

He said she was shivering when they found her and another trooper wrapped her in his uniform to keep warm. She was taken by ambulance to the hospital and he said she's safe and healthy now.

"I still can't get that out of my head, her turning over and looking at me and throwing her hands up in the air. I'll never forget that."