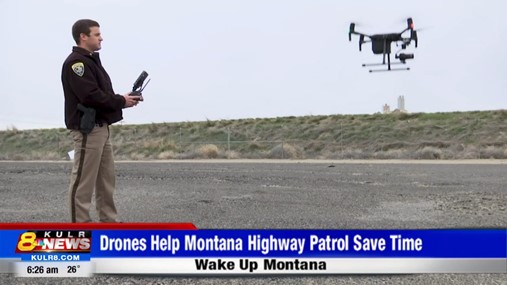 Montana Highway Patrol said their 15 drones mean less disruption to traffic, which means everyone is a lot safer on the roads.

Trooper Trever Chase has been involved in the drone program since 2017 when it started. He said drones have changed the way they investigate fatal crash scenes.

"Prior to the drone program, we used what was called a 'Total Station,' which was basically a 2-3 man team out there on scene basically surveying it: all the different evidence, the roadway, the tire marks and the vehicles themselves," Chase said. "Now, the drone requires just a 1-2 man team. We don't need to shut down roadways. And it would go from about 1 1/2 hours being on scene with the Total Station to about 20-30 minutes with the drone."

In addition to keeping the roads safer and saving time, the drones produce a better product.

"It will take multiple, hundreds, of photos," Chase said. "And, then it takes those photos and inputs them into software that we have. And, it uses those photos to match pixels and create basically a 3-D image of the actual scene."

Montana Highway Patrol Sgt Shawn Hazelton said 6 of the drones have thermal imaging. This is particularly helpful with missing person searches and searches at night.

"It gives us a whole different perspective as far as the ability to look at a scene," Chase added. "Eyes in the sky: you see a lot more."