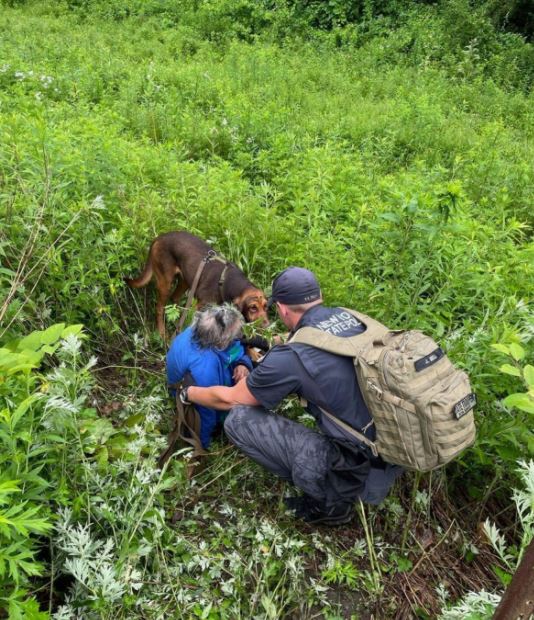 A missing Dutchess County woman was located alive and safe on the 4th of July by a state police bloodhound and her handler from Columbia County, said Aaron Hicks, public information office for the Delaware state Police Troop K.

The woman, 83, is from Dover and was located in a brush-filled field about two miles from her home. Police were first notified by the woman’s family at about 5:34 am on Sunday, after they reported they could not locate her. She was last seen by her family on Saturday night at 9:30, Hicks said.

Troopers arrived at the woman’s home and began searching for her. Trooper Justin Bell and bloodhound Tilly were also requested to the scene. Police searched the neighborhood and many wooded areas looking for the missing woman.

Several hours later, Tilly and Bell found the woman in a field about two miles away from her home. The woman was in tall brush, near a wooded area, Hicks said.

Paramedics were requested to the location where the woman was evaluated and refused any further medical assistance before being released to her family.

“Trooper Bell and Tilly are Division assets, meaning they can be sent anywhere at any time,” Hicks said. “Whatever assignment Trooper Bell is working on, there is a stand-by replacement for him, which will allow him to track with Tilly, on a moment’s notice,” Hicks said.

Tilly was born on April 15, 2018. In April of 2019, state police announced that Bell was appointed to the position of Bloodhound Handler and will be stationed at the Livingston barracks.

In early 2019, Bell and Tilly graduated from eight weeks of specialized training in Cooperstown.

Bell has been a member of the state police since 2014, and has been stationed in both troops F and K.

State Police have been using bloodhounds since the 1930s. The bloodhounds specialize in the tracking of people, including missing persons.

In July 2020, Tilly and Bell located a car theft suspect from Ulster County who was hiding from officers. In December 2019, a man was found by the pair, hiding in a barn, after fleeing a traffic stop on foot. And in August 2019, the pair located an endangered adult who was lost in a wooded area in temperatures that exceeded 90 degrees. The person had Alzheimer’s disease and was missing more than four hours, but Tilly located the victim within 15 minutes of picking up the scent.